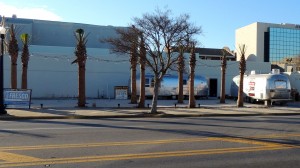 Alfresco’s, the food court on the corner of Palafox and Main streets, is close to opening, at least partially. Two Airstream trailers are being placed on the property.

Z Taco, with a Fresh Mex menu, is set to open late February. Gouda Stuff, with gourmet grilled cheese sandwiches, will open in March. Alfresco’s owner, Michael Carro, told the IN that he has spaces for two more AirStreams and has yet to determine what their menus will be.

Also, Jerry Misteretta, whose restaurant Jerry’s Cajun Café closed in June 2012, will be opening in early February a new restaurant in back of the old Trader Jon’s building. It will open onto Alfresco’s food court and have limited inside seating.