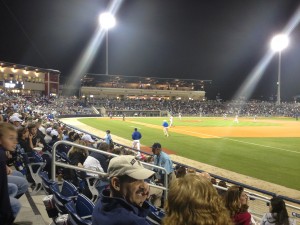 Press release: The Southern League of Professional Baseball Clubs has announced the Pensacola Blue Wahoos as the Don Mincher Organization of the Year. Votes for both awards were received from league general managers.

Since joining the Southern League in 2012, the Pensacola Blue Wahoos have produced an unmatched experience in baseball. Recently chosen as the â€œBest View in MiLB,â€ the Blue Wahoos organization prides itself on outstanding service to its loyal fanbase. In less than four years from its inception, Pensacola Bayfront Stadium saw its millionth fan walk through the turnstiles on Friday, May 8 of this year.

Before the season started, the Blue Wahoos welcomed a new member to its ownership group when two-time Masters Champion Bubba Watson joined Quint and Rishy Studer at the helm of the franchise. Watson made multiple appearances in Pensacola this season, only adding to the fan experience when he jumped on a dunk tank to support local charity. The Blue Wahoos have fully ingrained itself with the local community and have provided the springboard to grow the downtown Pensacola area into a popular destination.

Named in honor of the late Don Mincher, who served as Southern League President from 2000-11, the Organization of the Year is awarded to the Southern League club exemplifying the complete baseball franchise. By claiming this honor, Pensacola will be the Southern Leagueâ€™s nominee for the John H. Johnson Presidentâ€™s Trophy, which will be presented at the Baseball Winter Meetings in December. Pensacola previously won this award in 2012.

Tommy Thrall has been named the Radio Broadcaster of the Year, as selected by his peers and the Leagueâ€™s general managers. Thrall, who has eased listeners with his conversational tone, vivid descriptions and keeps our listeners up-to-date of former Blue Wahoos in the Major Leagues, has been with the team since its inaugural 2012 season. Besides calling games on a daily basis, the Northwest Missouri State University grad, serves as the play-by-play announcer for Blue Wahoos television games on Cox Sports Television.

Ray Sayre, Director of Sports Turf Management for the Blue Wahoos, is this yearâ€™s Groundskeeper of the Year, as selected by the leagueâ€™s field managers and umpires. He won this honor in 2014 and 2013. Sayre has been with the Wahoos since the teamâ€™s inaugural season. Growing up in Lexington, Kentucky, he began his turf career working on the athletic fields for the University of Kentucky. Before making the move to Pensacola, Sayre worked for several minor league teams including the Louisville Bats, the Greenville Drive and the Bowling Green Hotrods.

Dan Shugart, Sports Director at WEAR-TV, is honored with the Southern Leagueâ€™s Sports Media Award. Covering the team since the inaugural season, Shugart and WEAR constantly covers games, events and offseason activities to produce year round coverage in Pensacola. He continues to go over and beyond in his coverage of the team and league by producing stories to show the positive impact of the Blue Wahoos in the community. Shugart is such a staple in the community that the Wahoos organization help a Dan Shugart bobblehead night in 2014 with his signature mustache wiggling on the figurine.

The Blue Wahoos are heading into the playoffs for the first time in team history! Donâ€™t miss your chance to experience family-fun entertainment with the Pensacola Blue Wahoos! You can follow the team at BlueWahoos.com, facebook.com/PensacolaBlueWahoos and twitter.com/BlueWahoosBBall.