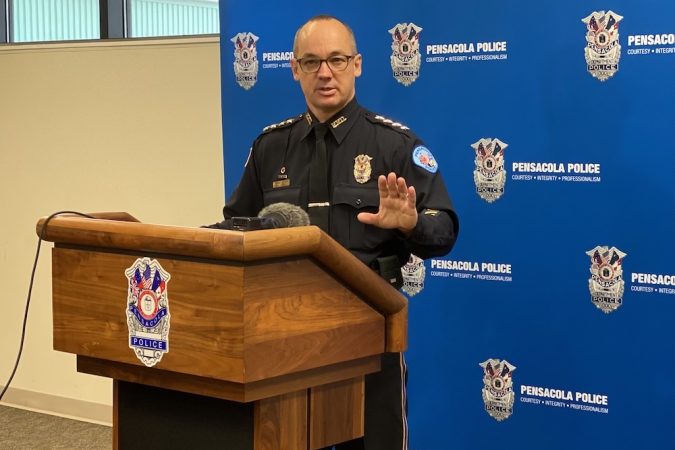 “It’s not an individual accomplishment for me,” he said, “it’s this body of work that our officers and support staff have done over the years, over the decades, just day after day after day.”

Chief Lyter will be retiring later this month and will soon begin a new job as chief deputy at the Escambia County Sheriff’s Office, under his old boss Chip Simmons, also a former PPD chief and who was elected Escambia’s sheriff last month.

On Thursday, Lyter fielded questions from the press and recounted his three-decade career in the city — he came on the force in 1990 and rose through the ranks to chief by 2017. He also looked forward to his new position with the sheriff’s office.

The chief mentioned that some people had told him they thought he was retiring early (he has three more years to go as per his DROP agreement with the city). He sees it differently.

“It’s been 30-plus years; I don’t feel like it’s early,” Lyter said, describing his retirement as more of a transition to another phase in his professional journey. “I’m still in law enforcement, I’m still in the profession I love. I get to work in the community that I love, and I get to work for an agency and a boss who I admire.”

While Lyter declined to elaborate on what exactly his purview would be with the sheriff’s office, instead deferring to Simmons, he did talk about some of his work with the PPD. For example, over the past year, he said he was proud of the department’s internal assessment and focus on mental health issues for officers.

“I realized, when we looked inward, that that was something that we were missing, was that mental health, officer wellness component,” the chief said.

Lyter also noted how he felt that the PPD is ahead of the curve when it comes to the national discussion being had about systemic racism within law enforcement and call for various reforms.

Over the past year and a half, the PPD has been engaged in efforts to address issues such as systemic racism in law enforcement and community relations, as well as officer training and mental health, mainly because community activists have demanded such efforts following a 2019 incident in which a former PPD detective shot and killed an unarmed Black man during a traffic stop.

Also arising from that 2019 incident was the formation of the Pensacola Citizen Police Advisory Board, which is designed to recommend changes that might improve the area’s community-policing dynamic. That committee has suggested that Escambia County consider creating a similar panel to work with the sheriff’s office, but Lyter didn’t sound optimistic about such a prospect.

“The Citizen Police Advisory Committee, right now, does not feel like a partnership to me,” he said. “It feels adversarial.”

Lyter said that he “still hopeful” that CPAC would produce “positive recommendations,” but said he didn’t think the committee wanted to work with the PPD.

“I was under the distinct impression that they really didn’t want to hear from us, so we’re sidelined,” he said. “And I think that everyone involved in it thinks it probably could have been a little bit better than what it is.”

Also, on Thursday, Lyter discussed his successor, or at least who he hopes would be his successor. The city is conducting a national search for a new chief, but the PPD’s number two is in the mix.

“I think we’re all rooting for Deputy Chief Christman, including the mayor,” Lyter said. “My understanding is, the mayor’s thinking is, you have to be able to defend that selection, and the way to defend it is the process — what process did you go through to decide on Chief Christman? He could step into this office today and not miss a beat.”

Lyter noted that he felt Christman — who has been named interim chief — could hold up well against any national pack of candidates. He believes the city’s search shouldn’t be read as a negative.

“I’m rooting for him, I’m hoping that he’s the pick. And just because they’ve opening it up on a national search doesn’t mean that he’s not going to be the pick, it doesn’t mean that they’re not happy with him, it just means that they’re going to defend this process,” the chief said, adding that it would be easier to “just pick” the next chief, but that he understood why the city was conducting a search.

“It’s not just the mayor’s decision,” said Lyter. “The mayor makes a selection, but it still has to be confirmed by the city council. And I don’t know, given today’s environment, I think that CPAC (Citizens Police Advisory Committee) would probably expect them to do a national search. I think the same thing, probably, with the city council, they would expect to do this larger search as well.”