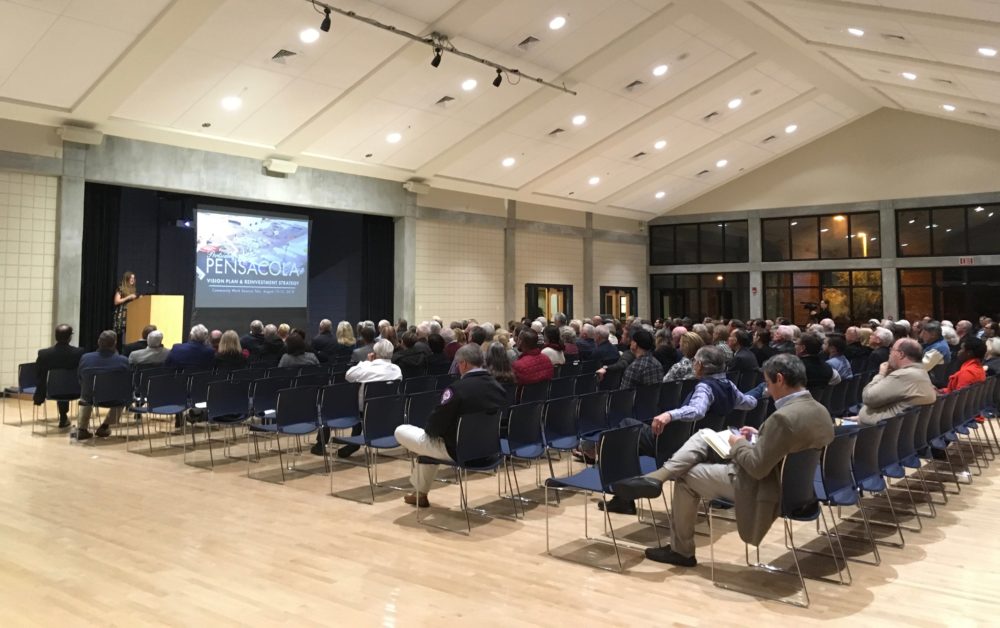 …Pensacola’s civic-engagement experiment entered a new phase Tuesday evening, with the formal unveiling of a new community resource organization and introduction of landscape architecture consultants to reimagine the downtown waterfront.

“Tonight’s the night where it’s all beginning to come together,” said Lisa Nellessen Savage, executive editor of the Pensacola News Journal.

Over the past year, Pensacola has received numerous civic tutorials via CivicCon, a partnership between the News Journal and the Studer Community Institute. The CivicCon concept is now evolving into a new education and resource center, The Center for Civic Engagement, with a mission of helping citizens engage with their community.

“In a nutshell, we’re going to be putting the lessons we’ve learned in CivicCon into action,” Nellessen Savage said.

The new center’s first initiative is hosting SCAPE Landscape Architecture for a five month study of the city’s downtown waterfront. The consulting group, with offices in New York and New Orleans, will be figuring out how best to connect people to the city’s waterfront; the study is being privately funded by Quit and Rishy Studer.

Tuesday’s event at the Sanders Beach-Corinne Jones Resource Center served as a kickoff forum for SCAPE to dig into its work. The group intends to mold its waterfront plans based on community research and public input.

“Please pay a lot of attention to what SCAPE is talking about because, you know, that port study is about to be released,” Quint Studer teased the group’s presentation and the impact it could have on the downtown landscape.

Gena Wirth, design principal at SCAPE, is no stranger to Pensacola. She was a featured speaker at last year’s CivcCon series, and has already given some thought to the city’s waterfront.

But, Wirth told attendees Tuesday night, now she wants to hear their thoughts about the city’s waterfront.

To get the ball rolling, SCAPE had arranged numerous stations around the auditorium, where people could discuss and share with the consultants how they felt the waterfront-design work should be approached.

“We’re really excited to work with you and learn from you,” SCAPE associate Lee Altman said, explaining to the crowd that the public represented the project’s “braintrust.”

Over the course of the five month study, SCAPE will be researching the area — everything from history to ecology and culture — and also conducting public input forums. The group will be presenting a draft version of their plan prior to a final version, and appears to be aiming for something both ambitious and realistic.

“We want this to be a responsible study that makes sure cost and benefits are really balanced and working for your community,” Wirth said. In addition to SCAPE’s work, CivicCon’s new Center for Civic Engagement has a line-up of topics that Pensacola can expect to learn about. Among the upcoming events, are presentations concerning strategic planning for communities, as well as how best to approach the issue of homelessness.