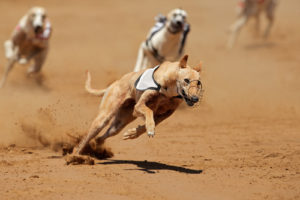 “Today, a committed group of Florida voters are filing a political committee named the Committee to Protect Dogs. The purpose of this committee is to pass ballot initiatives, at both the state and local levels, to reform and phase out greyhound racing.

According to state records, a racing greyhound dies at a Florida track every three days, on average. Thousands of greyhounds endure lives of confinement at these facilities, kept in small cages that are barely large enough for them to stand up or turn around. We are one of only two states, with Alabama, that does not report greyhound injuries to the public. This industry is cruel and inhumane, and only exists today because of a government mandate that forces gambling facilities to race dogs. All twelve greyhound tracks in the state are losing money on racing.

Over the past five years, a broad coalition has joined together to fight for changes to help greyhounds. Until now we have focused on the state legislature, where we have won major victories. Legislation to end the government mandate for dog racing, referred to as decoupling, has passed a legislative committee nine times and never lost a committee vote. It has also been adopted by the full House of Representatives and Senate. Similarly, a requirement for greyhound injury reporting has passed the Senate twice, both times on a unanimous vote.

Despite these victories, so far we have been unable to send a bill to the Governor’s desk. Each year, our efforts to help greyhounds have been stymied by other gambling issues unrelated to the welfare of dogs. Greyhound decoupling has also been held up, in part, by a rogue dog track that has blocked the humane measure as part of a larger strategy to obtain slot machine gambling.

We believe the legislature will eventually pass greyhound protection measures. However, while we remain engaged in the legislative process we also need a new path forward. The time has come to take our case directly to the voters.

Every initiative option is on the table, including a statewide constitutional amendment to prohibit dog racing. We have also identified several greyhound protection policies that can be passed via County initiatives. In the coming years we will fight for greyhound injury reporting, prohibitions on the use of 4-D meat in the racing industry, prohibitions on the use of anabolic steroids in female greyhounds, housing modifications, requirements that the fate of greyhounds be publicly reported, and other proposals.

We are extremely confident that we have public support for these proposals to help greyhounds. In the coming weeks, we will make further announcements regarding the 2016 election cycle.”