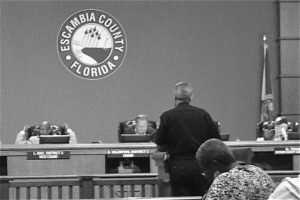 “We have reviewed the transition report slides and they are replete with inaccuracies and information that is either untrue or incomplete half-truths,” Gerald Champagne, attorney for the sheriff’s office, emailed Escambia County Attorney Alison Rogers a day before the July 25 presentation.

During last week’s agenda review session, county staff—primarily Rogers, Budget Director Amy Lavoy and Human Resources Director Tom Turner—provided the Escambia County Commission with an update on the transfer of the county Jail. County staff is currently working to transfer jail operations from the sheriff to the county; the transfer, with a target date of October, is being undertaken in the face of a U.S. Department of Justice mandate to address various concerns at the facility and a politically-heated budgetary blowout between Sheriff David Morgan and Escambia County officials.

Champagne took issue with specifics relating to transferring current jail employees into the county, and also Interim Administrator George Touart’s assertion that the county could cut costs in the transfer by consolidating information technology (IT) services with the sheriff’s office.

Touart told commissioners last week that consolidating IT could save between $100,000 and $150,000. Specifically, the county would be making use of an existing server at the sheriff’s office which, the commission was told, was purchased with jail funds (generated via the inmate commissary).

“If we do this functional consolidation, those costs will go away,” Touart said.

Champagne informed the county that the server was not purchased with such funds, and would not be available for county use. Also, the approximate cost of the server was $250,000.

Following the county’s transition-update, Sheriff Morgan also elaborated on the prospects of consolidating IT.

“The primary reason the county cannot run our IT department is because you have to be a law enforcement agency to have access to systems such as DAVID, NCIC which is managed by the FBI and FCIC which is managed by FDLE,” the sheriff relayed in an emailed statement. “County employees by law cannot run those systems as they must be employees of a law enforcement agency.”

Touart mentioned last week that the sheriff had previously requested consolidation. He explained to the commission that he couldn’t recall the instance in question, but that legal had assured it was the case.

“If I’d known about this I’d certainly recommended this to the board,” he said.

Morgan said later that he had been looking to consolidate—“it wasn’t a year ago, it was four or five months ago”—and asked the county for an assessment. The sheriff said the county “withdrew from the negotiations.”

“After checking with IT, it appears the cost and/or funding source of a particular server purchased by ESCO has not been definitively established,” she explained in an email on Friday. “However, if Mr. Champagne asserts it isn’t available anyway, then it doesn’t seem like it would matter.”