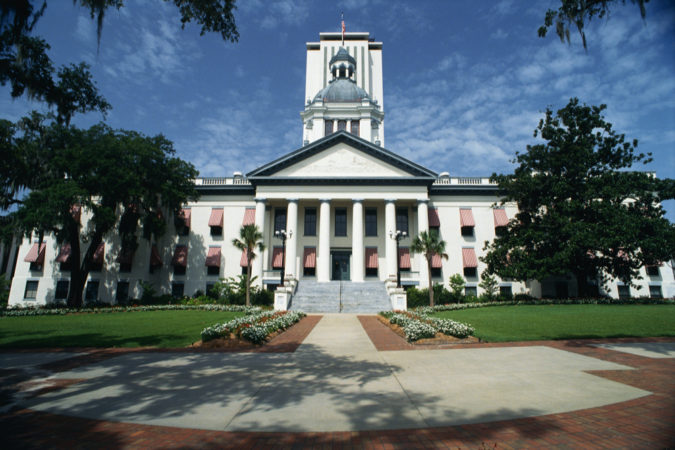 Florida Health Care Association Director of Reimbursement Tom Parker told Mayhew that the nursing-home group had been hearing from people who are eager to visit family members and friends who are residents of long-term care facilities.

“Lots of family members are calling and wanting to come to the facilities to see their loved ones,” Parker said. “Is there any update on that emergency order being extended?”

In the executive order, Moskowitz made clear the 30-day ban took effect March 14, which meant it expired Tuesday. As of Tuesday night, Florida had 1,179 confirmed cases of the disease in long-term care facilities in 52 counties, according to state data. Escambia County has 48 such cases, and increasing at a rate of nearly six per day over the past week.

Blackwater River Correctional Facility, a Santa Rosa County prison outside of Milton that is operated by The Geo Group, has eight employees and 33 inmates that have tested positive for COVID-19.

The latest count brings the total number of positive cases among workers in the state prison system to 54, the Florida Department of Corrections announced in a news release Tuesday—which means all but two inmates are in Blackwater.

The News Service of Florida reports The Geo Group has refused to answer questions about Blackwater’s 41 COVID-19 cases. Instead, the Boca Raton-based company has referred questions to the Department of Management Services, the state agency that oversees private prison contracts. DMS officials have not responded to The News Service of Florida’s questions about Blackwater’s situation since April 9, when the number of cases within the inmate population soared to 30.

Gov. Ron DeSantis’ administration has not revealed the number of inmates who have been tested for COVID-19 or who have been placed in medical isolation after being exposed to the virus. Florida has the third-largest prison system in the nation, with roughly 94,000 inmates, 145 facilities and 23,000 employees.

Florida has spent about $500 million on emergency supplies and support for the COVID-19 pandemic, Division of Emergency Management Director Jared Moskowitz acknowledged Tuesday.

“What is the value of saving a life? The answer is that it’s unlimited, right? So, if we have to make decisions to get life-saving PPE (personal protective equipment), regardless of whatever the cost is, and buy it from whoever has it, we are going to do that,” Moskowitz told reporters following a press conference with Gov. Ron DeSantis Tuesday afternoon.

Moskowitz’ comments came after DeSantis announced the White House had “earmarked” one million N95 face masks for Florida. States across the country have been competing against each other and the federal government as they scramble to obtain critical medical supplies in the fight against the novel coronavirus. DeSantis said Tuesday 800,000 of the masks have already arrived and will be distributed quickly to front-line hospitals and health-care workers.

“When this all started, we had had millions of these masks ordered. We would be told they would be delivered on Friday, then you’d go and they disappear. That’s been a real, real problem, how the secondary markets work, but I’m glad we were able to work this out with the White House,” the governor, a close ally of President Donald Trump, told reporters.

Over the next 36 hours, the state emergency management agency also will be distributing 1.2 million surgical masks; 100,000 face shields; 500,000 gloves; 60,000 containers of hand sanitizer; and 35,000 gowns to hospitals and health-care workers, DeSantis said. The delivery will bring the number of masks distributed by the state to 8 million and gloves to 5.5 million.

“We’ll buy it from whoever can sell it to us, as long as the product is real. We will pay what it costs, because I am not going to put a value on a life,” Moskowitz said.

The emergency management director said price gouging “obviously” is occurring as the number of COVID-19 cases continues to soar. “It’s something we have to deal with, right?” he said. “But, to Monday morning quarterback what is the right amount of money when this is all over, I can tell you that we are making decisions at the division to make sure that we can get stuff down to where it is needed, to the first responders, so they have the life-saving PPE that they need.”

Fried, who has complained about a lack of communication between the statewide elected officials, said she’s been requesting weekly briefings from the governor’s office since before an April 7 Cabinet meeting was canceled.

“It’s important that we do meet so we can have these conversations and discuss it,” Fried told The News Service of Florida from her home. “A lot of the stuff that we may not have to vote on could be one-on-one conversations at the very least, to give us up-to-date information of what is happening in our state.”

DeSantis and the Cabinet — Attorney General Ashley Moody, Chief Financial Officer Jimmy Patronis and Fried — haven’t held a meeting since Feb. 4, more than a month before the governor declared a state of emergency as Florida tried to slow the spread of COVID-19, the deadly respiratory disease caused by the coronavirus.

“Since even before the (April) Cabinet meeting was canceled, I had requested different briefings on a weekly basis to keep us up to speed on what is happening and what our response is across the state,” Fried, the only statewide elected Democrat, said. “Where can we kind of work together?”

DeSantis’s daily schedule on Monday included a phone call with Moody to address COVID-19, with a Moody spokeswoman saying the conversation did not involve other issues.

“The attorney general and governor do not discuss Cabinet issues outside of public meetings,” Moody spokeswoman Lauren Cassedy said in an email.

The governor’s office didn’t immediately respond to questions about the call with Moody or the future of Cabinet discussions.

The call was the first contact DeSantis is listed on his schedule as having with any of the Cabinet members since he started issuing emergency orders related to the virus on March 1. He issued the state of emergency March 9.

Patronis has been pushing DeSantis and legislative leaders to convene budget experts to determine the possible impacts of the coronavirus on the state’s finances.

On March 24, Patronis tweeted that officials would benefit from a public briefing on economic models before DeSantis takes final action on a $93.2 billion budget that lawmakers approved last month.

“Would be happy to see the Cabinet meet to hear from SBA & Bond Finance,” Patronis tweeted at the time, referring to the State Board of Administration, which oversees state investments, and the Division of Bond Finance.

Amy Baker, coordinator of the Legislature’s Office of Economic and Demographic Research, informed Patronis on April 7 that “credible estimates” may not be possible until May at the earliest.

“At this point, what we do know is far outweighed by the assumptions we would need to make,” Baker said in the letter released by Patronis’ office on Monday. “There are still too many key questions for which there are no current answers. This would make any attempt to begin revising the estimates earlier than mid-May speculative, at best.”

Fried isn’t the only Democrat calling for more communications from the governor’s office.

Democratic members of Congress, representing some areas of Florida hit hardest by COVID-19, have argued they’ve been left out of the loop on state efforts to slow the spread of the deadly disease.

Also, state Rep. Ben Diamond, D-St. Petersburg, has been pushing for public airing of the issues.

“Now more than ever, the governor and Cabinet need to be meeting in the sunshine to coordinate the state’s response to COVID-19,” Diamond said in a statement Monday. “The governor should not use this state of emergency to put off Cabinet meetings. The governor and Cabinet should come together and work collaboratively and publicly to help all Floridians during this crisis.”