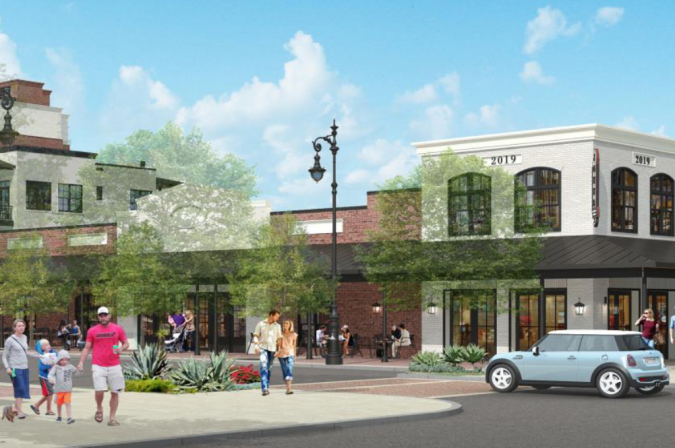 The Pensacola Community Redevelopment Agency jumped into a public-private partnership Monday night with a collective of developers who have reimagined a chunk of downtown they’ve dubbed the East Garden District. The collaboration — which includes a $1.3 million commitment from the city — is aimed toward streetscaping, mix-used developments and tax revenue.

Chad Henderson, CEO of Catalyst HRE, laid out this vision for CRA members, asking them to view the project through the “lens of space-making” and described it as “a mix of experiences that would create a sense of place.” The lead developer framed the project — centered around the intersection of Garden and Jefferson streets — as the next piece of the puzzle for downtown, expanding on other recent developments and the city’s efforts to create a more walkable urban core.

“The power of a well-thought out public-private partnership can really move the needle downtown,” Henderson said.

As laid out on paper, the East Garden District project involves 20,000 square feet of repurposed properties along Garden Street, as well as 30,000 square feet of new mix-used developments. There are also plans for a 175,000 square foot hotel, with accompanying parking garage at the intersection of Jefferson and Chase streets.

The city’s $1,375, 000 will go towards a road diet for a stretch of Jefferson Street, between Garden and Chase. Vehicular lanes will be reduced, sidewalks on either side of the road gain a few feet, and new landscaping and streetscaping will blend with a planned urban plaza.

“A pretty good investment for the city,” Henderson said. “not only from an economic perspective but from an experience perspective.”

In general, developers invoked the spirits of CivicCon and Southtown and said that the East Garden District project was designed to dovetail with the city’s Complete Streets Initiative.

The CRA board — comprised of Pensacola City Council members — appeared readily receptive to the project, as well as the public-private partnership aspect of the deal. They used words like “praise” and “beauty.”

Councilwoman Sherri Myers appeared to be the CRA’s lone voice of dissent on the matter, expressing concerns about the project’s impact on flooding in the area.

“I am concerned about the flooding,” Myers said. “I mean, it floods in a thunderstorm down there.”

But Myers was won over once she realized the project also involved relocating power infrastructure underground.

The only real critique of this East Garden District project came from Dan Lindemann, who owns property nearby on Palafox. While Lindemann didn’t seem to have issues with the scope of the project — “I love it” — he was upset neighboring property owners had not been brought into the conversation during the project’s planning phase.

“I was never called to the party on this,” he said. “I had to invite myself.”

Lindemann described his feelings regarding the process and what he viewed as lack of inclusiveness from both the developers and city administration as “resentful,” “disappointed” and “confused.”

“We want to be good neighbors,” Henderson said, also addressing flooding concerns with project aspects such as pervious pavers, the planting of trees and inclusion of bioswales.

Developers said work should begin in the first quarter of 2021, and also that aspects of the project such as the hotel may be a bit market dependent. The CRA ultimately ended up unanimously approving the public-private partnership, as well as the project’s concept.