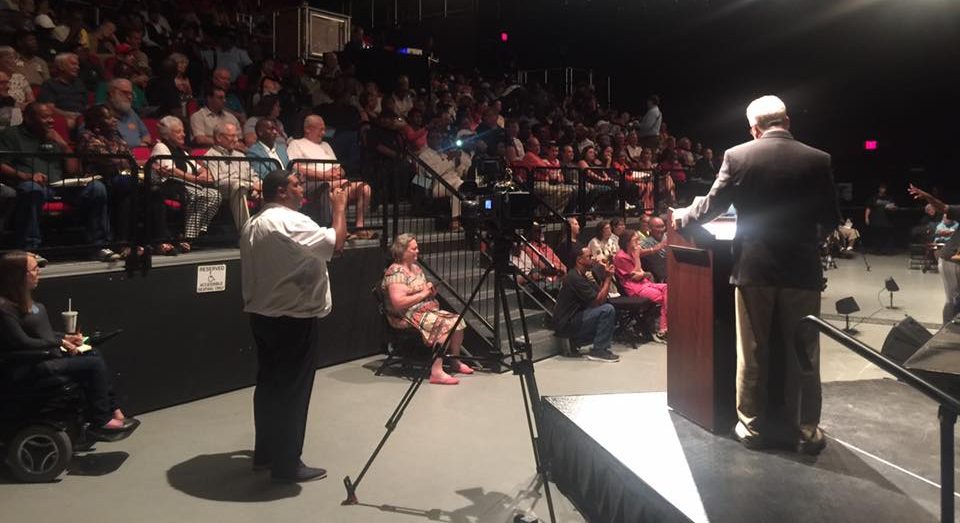 Every morning around six the ECAT buses start their routes. A local rider, Joy Hall, takes that six a.m. bus to the first of her two jobs. She walks six blocks to her bus stop and waits anywhere from 20 to 45 minutes for the bus to come, hoping she’ll make it to work on time.

Regardless of weather, Hall’s routine continues. Some days she walks in the rain, others in hail and most in the blistering heat, but it’s the only mode of transportation she has. And then, in the evening, she does it all over again, waiting for the bus to take her home after a long days work.

She added, “So for people who don’t have the ability to drive, this bus system is everything.”

Hall was one of about 430 people who attended the Transit Town Hall meeting Aug. 14, and was one of about 30 who spoke against Commission Chairman Doug Underhill’s idea to cut back the mass transit system.

“We’re here tonight,” Reverend H.K. Matthews said, “For the transit drivers, but really for the transit riders. Because real people rely on this system to get them where they need to go.”

The meeting was hosted by the Amalgamated Transit Union Local 1395 to create a forum for ECAT riders to be heard. The panel included nine people ranging from county commissioner to local pastors, and everyone in between.

A majority of the locals who attended the meeting does not own a car. Since the buses stop running at 6 p.m., local churches donated vans to transport attendees to and from the meeting.

As the meeting came to a close those who attended filed out of the building and formed lines on the curb, waiting for the donated vans to carry them home.

Joy Hall was among those in line for a van.

Her commute home that night would take longer than normal because the van had a handful others to drop off, but she was happy to make the trip to take a stand with her fellow ECAT supporters and riders.

“If everyone had to ride the bus for a week they’d understand why this issue is so important to us,” Hall told Inweekly.