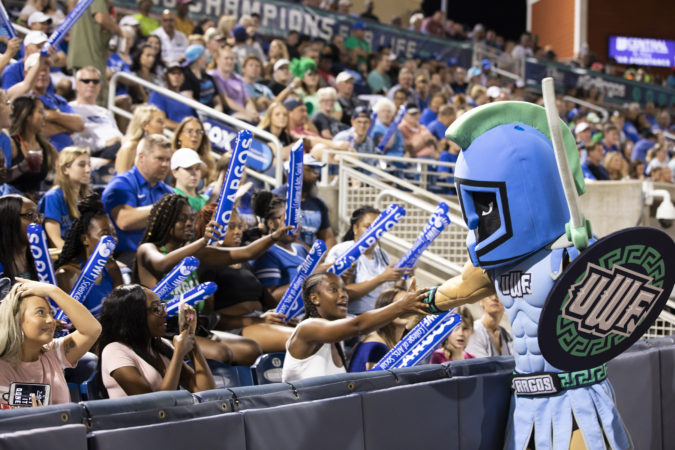 An economic impact analysis completed by the Haas Center at the University of West Florida shows the 2018 football season generated an estimated $9.7 million in sales in Escambia County.

The Haas Center used various inputs, including ticket, concessions and merchandise sales information from UWF Athletics, student spending and other data in its calculations. Nearly half of the economic impact resulted from more than 13,000 visitors to the area and their spending on retail, restaurants, bars, accommodations and other items.

“The results of the report will be invaluable in helping the University administration improve the game day experience for visitors and attract and retain sponsors,” said Dave Scott, UWF athletic director. “This truly shows the value that UWF Football has on the community and the campus as a whole.”

UWF football’s economic impact was associated with $6.1 million in value added to the economy, supporting 94 jobs and generating approximately $4.6 million in personal income.

The study completed by the Haas Center also details information about out-of-town visitors who attended home games. An estimated 55% stayed in Pensacola overnight, with 33% staying in paid accommodations such as hotels or condos. The majority stayed in downtown Pensacola, where they accounted for approximately $1.2 million in sales.

“The report’s initial goals were to illustrate to key stakeholders the economic value of the program, the games and its visitors,” said Amy Newburn, director of market research for the Haas Center. “It also highlights key qualitative measures, like game experience or recommending an Argo game to a friend, that show how much the community enjoys the presence of UWF football in downtown Pensacola.”

UWF will host the Virginia University of Lynchburg in its 2019 football home season opener at 6 p.m. on Saturday, Sept. 21 at Blue Wahoos Stadium. The Argos will host five home football games this season.
For more information or to see a complete schedule, visit uwf.edu/football. To learn more about the UWF Haas Center, visit haas.uwf.edu.