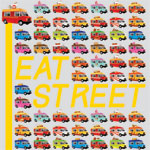 The food trucks are almost here. Almost, but not quite.

After three years of debate, of rolling along a rocky road rife with contention, the city of Pensacola finally appears to be paving the way for food trucks. City council members managed to grant initial approval of a proposed food truck ordinance Oct. 8, with their final decision on the new ordinance to come in November.

“No one is going to get 100 percent what they want,” Councilman Larry B. Johnson said in laying out his proposed ordinance. “This is a compromise.”

Council’s first-reading approval of the ordinance comes as public demand for action on the issue has built.

“We need to get something on the books,” Mayor Ashton Hayward urged council members. “I think a few of you feel that way.”

Clearly, council did seem ready to make a move. This trip had gone on long enough–caricatures in the daily paper were becoming bruising.

The conversation about food trucks has gone on so long primarily because of disagreements between food truck operators and downtown restaurant owners. Established restaurants — credited with contributing to downtown’s revitalization in recent years — fear that food trucks will negatively impact their businesses.

A handful of members of the downtown dining community expressed their concerns to council once again.

“We feel that the entrepreneurial spirit is a wonderful thing, but as the first gentleman said, it’s not free,” said Jack Williams, whose family owns Seville Quarter. “We just hope that you will consider those of us who invest in brick and mortar.”

“This should be a compromise between all of us,” Dowdy said.

The nut of the food truck debate centers on downtown, specifically along South Palafox Street. Restauranteurs don’t want to see the food trucks allowed close enough to their establishments to draw business away.

The ordinance council is considering — ultimately a melding of Johnson’s proposal and a version by Councilman Charles Bare that has been kicked around in recent months — doesn’t allow food trucks on South Palafox between Garden Street and Plaza De Luna. But it is void of a so-called buffer zone preferred by the restauranteurs which would prohibit operating a food truck within a prescribed distance from an established brick-and-mortar business.

Referencing the absence of the buffer zone, Spencer described the new ordinance as “gutted.” He implored council to consider the interest of downtown business owners — “We don’t want to kill the golden goose” — who he said could not be in attendance to fully state their own case.

“They’re not out there, they’re not able to be here,” he said. “They’re working.”

Johnson brushed off such concerns, contending that food trucks didn’t pose a real threat the restaurants. He relayed a conversation with a friend — Chips Kirchenfeld, who sits on the planning board and also owns the Dharma Blue restaurant — that he said led him such a position.

“He said, ‘Larry, I’ve never seen a food truck put a restaurant out of business,’” Johnson said. “I think we should give this a chance.”

Council ended up making a few tweaks to the food truck ordinance prior to approving its first public reading. They nixed certain aspects, such as size limitations and time limits.

By the time the second and final reading rolls around Nov. 12, there could be further changes. Spencer, as will as Councilman P.C. Wu and President Andy Terhaar, said they would need to see additional tweaks — primarily, the addition of the buffer zone — in order to support ordinance.