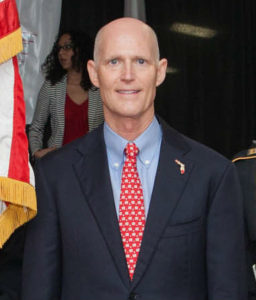 Senators raised questions Wednesday about how Gov. Rick Scott’s administration has handled negotiations with the federal government over billions of dollars in health-care funding that has thrown the state budget process into disorder.

The Senate Ethics and Elections Committee spent more than an hour grilling Agency for Health Care Administration Secretary Liz Dudek, largely over the health-care questions, before overwhelmingly confirming her as the head of the agency that oversees Medicaid.

That came on the same day that legislative leaders conceded they will not finish the state budget by the scheduled May 1 conclusion of the legislative session, even though some senators appeared to open the door to dropping a plan to use Medicaid-expansion funding to help low-income Floridians purchase private insurance.

Key to the complicated back and forth is whether that Senate expansion plan, which would spend $2.8 billion in federal money, is tied to negotiations over extending a $2.2 billion program for hospitals and other health-care providers that is set to expire June 30. Losing federal funding for the Low Income Pool, or LIP, program could blow a hole in the state spending plan for the budget year that begins July 1.

In her sworn testimony to the Senate committee, Dudek insisted that the federal Centers for Medicare & Medicaid Services had never explicitly tied Medicaid expansion to LIP funding before the federal agency sent a letter Tuesday to the state. The federal government pays for a large portion of the LIP program and needs to agree to any changes and an extension.

“Understanding that there was an ongoing debate regarding expansion, and as we were only tasked with LIP, from the beginning we had an agreement with CMS that our discussions were only about LIP and not about expansion, and that we stressed that LIP funding would be needed regardless of expansion,” Dudek said.

Supporters of linking the two programs note that LIP is largely used to cover the expenses of uninsured, low-income Floridians who show up at hospitals needing treatment. Expanding coverage to more residents, they say, would allow hospitals to avoid some of those costs.

Senators were skeptical of the idea that the agency was unaware that LIP funding and Medicaid expansion were tied together in the negotiations. They noted that, according to media reports, a letter sent to CMS by the state’s congressional delegation dated Tuesday — and asking that LIP and expansion be considered separately — was largely written on an AHCA computer well before.

“But yet weeks ago, a letter was crafted within the agency, and you asked members of the United States Congress to sign it, and if you didn’t have any understanding or prior notice that coverage expansion and LIP were linked, why go to all the trouble of getting a letter and circulating it around Congress?” asked Sen. Don Gaetz, a Niceville Republican and former Senate president.

Gaetz said after the meeting that “of course” he believed that AHCA was aware the two issues were related.

Dudek told the committee and reporters that while the agency was aware of talk that Medicaid expansion and LIP might be related, the point didn’t come up in negotiations.

“We had heard — and there’s a lot of information that seems to go around through the grapevine — that they were considering that there might be a linkage,” she said after the meeting. “We wanted to make sure that they would support LIP regardless of what happened with expansion.”

“Yesterday was the first time CMS linked LIP to Medicaid expansion,” spokeswoman Jackie Schutz said in an email. “Federal lawmakers, like Sen. Bill Nelson, did publicly link it at the start of the March, as restated in (Senate President Andy) Gardiner’s statement on April 1st, but they were not involved in the internal negotiations with CMS.”

Statements that Scott and AHCA have made about the health-care funding issues have repeatedly been called into question in recent weeks. In addition to the dust-up over how closely linked Medicaid expansion was to LIP, federal officials hotly disputed a claim by the state two weeks ago that CMS had suspended negotiations about the hospital funding.

Many Florida officials continue to insist that the two issues should not be linked. The letter signed by six members of Congress — all Republicans opposed to the federal law that allows for Medicaid expansion, including U.S. Sen. Marco Rubio, a presidential candidate — noted that medical schools, county health departments and other medical facilities that wouldn’t be affected by Medicaid are supported by LIP.

“CMS should not destabilize, eliminate, or hold these programs hostage to an expansion decision,” the letter says.

Meanwhile, Gaetz also criticized the decision to send only vague LIP proposals to federal officials in late February and early March, and then a more-specific Senate plan after it was put forward in March, even though the state knew that the program was set to expire at the end of June.

“According to the testimony here today, at least nine months went by when nothing in writing was put before the federal government on a multibillion-dollar issue that we had a year’s advance notice on,” he said after the meeting. “That’s close to malpractice.”

Dudek said state and federal negotiators were waiting for the completion of a report that was finished earlier this year, and that the federal government had told AHCA that it didn’t need a written proposal early in the process.

“And, President Gaetz, had they told us that there was something required at that point in time, of course we would have done that,” she said in response to a question from Gaetz about the timeline. “They told us they would be flexible, they told us that we did not need to submit something formally at that time.”

Even if the federal government were to extend some level of LIP funding, lawmakers would still need time to go through protracted negotiations over the final shape of the budget — and health-coverage expansion could still be on the table. However, Gaetz and Senate Appropriations Chairman Tom Lee, R-Brandon, suggested that the Senate might be willing to drop its coverage-expansion plan to clear the way for a budget deal.

“We will let the numbers drive what makes sense for Florida, and if we can find a way to provide the health-care services that we’ve promised Floridians at low-income levels with current programs, then we want to maintain an open mind about how we might do that,” Lee said.

The House has been unyielding in its opposition to expansion. Speaker Steve Crisafulli, R-Merritt Island, reiterated Wednesday that the House has not changed its position.

“I would prefer it would be the Senate giving up their position because we’re not moving on our position,” he said.

But if LIP funding were to fall, the drop could prompt lawmakers to raid state reserves or make other cuts to fill the budget hole. Crisafulli indicated he’s not interested in spending reserves on health care.