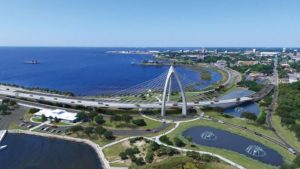 Pensacola Mayor Ashton Hayward told Inweekly this morning that he had no intention of slowing down the construction of the Pensacola Bay Bridge.

He had asked for an aesthetic review of the $600-million replacement bridge, but said, “We do not want to down the bridge process.”

On Tuesday, State Sen. Don Gaetz said in an interview on “Pensacola Speaks” that he was concerned that the review would delay construction anywhere from six to 18 months, which would put the funding in jeopardy.

The mayor said he talked with Sen. Gaetz Tuesday night.

“Senator Gaetz did an incredible job securing the funding for this bridge,” said Hayward. “I assured him we do not want to hold up the process. As soon as I got off the phone with him, I called the Jim (Boxold -FDOT Secretary) and made sure he understood that, too.”

Hayward said, “Fabulous bridges are being built across this country. There is no reason why Pensacola can have an iconic bridge.”

He added, “I want to sure Pensacola gets what it deserves.”

Alan Gray, one of the proponents of the Vision Pensacola initiative, will be on “Pensacola Speaks” this afternoon at 5 p.m.