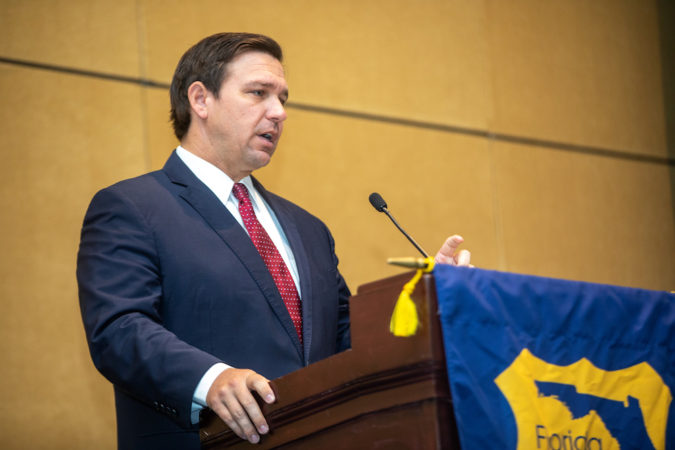 In his State of the State address today, Governor Ron DeSantis encouraged lawmakers to recognize that people are more mobile and will move out of states with high taxes and too many regulations.

“We live in an increasingly mobile and interconnected time,” said DeSantis. “States cannot tax, regulate and spend with impunity without significant negative consequences.”

He continued, “Taxpayers flee. Businesses relocate. The economic base narrows and the state inevitably hemorrhages money. Rinse and repeat.”

He cited IRS figures that show Florida has led the nation for six consecutive years in the amount of income brought to the state from the migration from other states. The governor said, “People are voting with their feet, and they are leaving states with bad economic climates for the greener economic pastures of the Sunshine State. “

DeSantis told lawmakers, “We have a chance to take bold action to make a lasting positive impact upon Florida’s environment. Let’s seize this opportunity.”

His environmental plan had three components:

The governor once again touted the need for vocational training and apprenticeship programs – “Thanks to the leadership of our Commissioner of Education Richard Corcoran we have launched an initiative to make Florida the nation’s leader in workforce education by 2030 and, thanks to your support, we are off to a good start.”

He also talked about the need for E-verify to ensure we have a legal workforce, protect taxpayers, and “place an upward pressure on the wages of Floridians who work in blue collar jobs.”

DeSantis reiterated his proposal to set a minimum salary for public school teachers at $47,500, bringing Florida from the bottom half of states to number two in the nation–“My plan will lead to a substantial pay increase for over 100,000 current teachers throughout the state.”

He also wants to replace the Best and Brightest bonus program with a proposal that places an emphasis on bonuses for teachers and principals in Title I schools, with bonuses available of up to $7,500 and $10,000.

The governor said that Commissioner of Education Richard Corcoran will be unveiling new standards that will replace Common Core and focus on “high-quality curriculum, streamlined testing and a renewed emphasis on American civics.”

He said, “I can reveal that one key to our replacement of Common Core will be a renewed emphasis on American civics and the U.S. Constitution.”