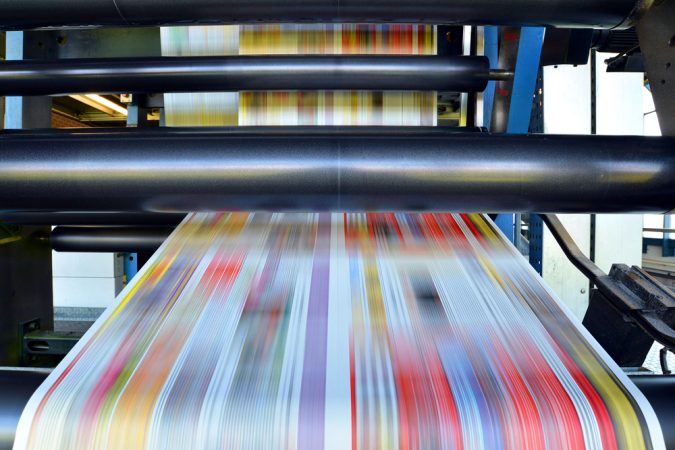 For two years, he covered the O.J. Simpson trial—”one of the most unique crimes ever.” While with the New York Post, he was the city editor for what is probably the most famous tabloid headline of all-time: “Headless Body in Topless Bar.” Managing editor Vincent Musetto came up with the headline, but it was Belsky’s job to do the fact-checking.

A man had tried to hold up rundown bar in Queens and shot the bartender who resisted the robbery.

“One of the customers in the bar is a mortician, and the guy uses her instruments to cut off the head,” he shared. “Apparently he thought his bullet would be in the head, so if he took the head—’Well that makes sense, I’ll take the head with me’—and so they catch him actually later with the head anyway.”

Belsky continued, “It could’ve just been like a two-paragraph, weird thing in the paper, but the editor said, ‘I’ve got this great idea for a headline, Headless Body in Topless Bar.’ The only problem was we didn’t know if it was a topless bar, because it didn’t say topless bar. So my assignment was to determine if indeed it was a topless bar so that we could run that headline.”

He sent reporter Maralyn Matlick to find out, and she reported back that the bar had no signs advertising topless dancers.

“She then, because reporters have a lot of ingenuity, said, ‘Let me try something,’ and she went around to the back of the bar, crawled up on a garbage can and looked in this grimy, dirty window into the bar. She saw a sign that said ‘topless dancing tonight,’ and that was it—journalistic history was made.”

His latest Carlson novel, “The Last Scoop,” involves a serial killer, and his experiences covering Son of Sam early in his career helped him write the novel.

“The peg of the book is that no one knows that serial killer’s out there, because we think of serial killers, as like Son of Sam, writing notes to the press and blood is in the streets and ‘I’m going to take another victim tomorrow’ and all that,” he shared. “But the reality with Son of Sam is for probably close to the first year, no one knew he was killing anybody because he had shot and killed several women, but nobody put it together.”

He continued, “Nobody connected it because they were different places, and it wasn’t until about six months before he was finally caught that they did a ballistics thing that determined that the same gun had probably been used in several killings. And then suddenly it’s, ‘Oh my gosh, there’s a serial killer out there.’”

Belsky has interviewed, discussed writing over drinks and sat on panels with several writers. He shared some of their insights.

Michael Connelly
On how journalism shaped his fiction writing: “His answer, which I think I would agree with, was that if I hadn’t been a journalist, I would never have been an author.”

On writing in third person: “Harry Bosch is interesting because almost all the great PIs or police people in books are first person—Marlowe with Raymond Chandler, Spencer with Robert B. Parker.

“I would spend hours thinking about this. So I thought I’d get the brilliant answer, like, ‘Why did you do it that way? What does…’ And he just looked at me and he kind of shrugged, he went, ‘Gee, I don’t know, I never thought about it.’ And that is the brilliance of Michael Connelly. He just wrote what he felt.”

Sue Grafton: “Sue Grafton was a fascinating woman, and she also was one of these people who had great admiration for the mystery as craft.”

“And a lot of people go like, ‘Oh, well, you’re only writing a mystery. Why don’t you write a real novel?’ And she talked about that—it might’ve been at Killer Nashville. And she says, ‘People always tell me I should be writing a real book instead of a mystery. I’ve tried to read a real book, like a novel that’s not a mystery. And I keep turning the page and saying, okay, when is something going to happen?’ And I think, for those of us who like suspense and mysteries, that’s how we feel, we like books where things are happening.”