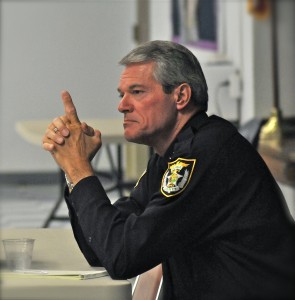 When you ask Escambia County Administrator Jack Brown and some of the county commissioners about the rise of suicides and other deaths in the county jail, the standard reply has been that the jail is run about the same people who ran it before it was transferred from the sheriff’s office to the county in 2013.

The implication is the problems at the jail——2014 explosion that killed two inmates and the three suicides and two other deaths over the past 13 months——would have happened if the Escambia County Sheriff’s Office still supervised the facility.

Sheriff David Morgan told Inweekly that is a false assumption, and it has been a mistake to isolate the infirmary and health care decisions from a chain of command that holds the medical staff accountable.

He said that David Benoit, his Health Services Administrator, reported directly to the administrative commander and the chief deputy. His command staff was kept apprised of health issues on a daily basis.

“Benoit reported directly to the command staff,” said Morgan. “There were daily updates and briefings on jail medical. If we had a spike in anything at the jail, if we had any attempted suicides, any inmate on inmate issues, if we had an inmate that had a significant medical issue, we were kept updated on that daily.”

He said that his chief financial officer, risk manager, human resources and his commanders weighed on the exceptional health problems. The jail infirmary staff had to answer to them, which the sheriff believed made a difference.

Sheriff Morgan recalled a meeting with one of his jail commanders.

“My first meeting with her was not pleasant. We had a lady in the jail that should have been taken to the hospital, and I was given the song and dance, well under the old administration … I said ‘stop,’ it’s not the old administration. If we’ve got these folks, I’ll find the money to transport them wherever. From then on, she was really good about telling me about any medical issue in the jail. “

“Our complaint with Armor was not about the quality of service, it was about the cost,” said Sheriff Morgan in a recent interview. The county wanted the sheriff to cut his budget by $6 million. His staff didn’t make that target but did reduce its budget about $4 million. Taking over the jail infirmary from Armor helped the sheriff to reduce the jail’s budget.

“Armor wouldn’t negotiate with us,” recalled the sheriff. “They basically walked away from the table and never came back. They said, ‘We can’t reduce the cost of jail medical,’ and they just never returned.”

Morgan had his staff visit four sheriff’s offices within the state and figure out how to take jail medical in-house. He hired David Benoit as his health services administrator. Benoit had worked nine years in health services with the Florida Department of Corrections, rising to the level of Regional Health Services Manager.

Benoit stayed in charge of the jail infirmary after the county took over in October 2013. He left in July 2014, two months after the jail explosion. Four months later, the county jail had its first suicide.