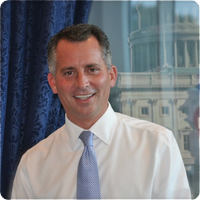 Joining three other Florida congressmen in seeking to move to the U.S. Senate, Pinellas County Republican David Jolly said Monday he will run in 2016 for the seat being vacated by presidential candidate Marco Rubio.

Jolly, who was elected to Congress last year in a high-profile battle with Democrat Alex Sink, offered a conservative message in announcing his Senate bid, saying the “time to reclaim America begins right here, right now.”

“Over the next year, I intend to run for the United States Senate on an unwavering platform that will reject the politics of division and class warfare that have defined the current administration, reject the failed foreign policies that have projected only weakness and apology on the world stage, and embrace a new economy founded on the principle that individuals and families, not government bureaucrats, create success,” Jolly, 42, of Indian Shores, said in a prepared statement.

Florida Democratic Party Chairwoman Allison Tant quickly issued a statement Monday blasting the four announced GOP candidates, including Jolly, who worked as a lobbyist before getting elected to Congress.

“Koch-backed Tea Partiers, a no-show lieutenant governor with more baggage than Rick Scott’s private jet can carry, and now a Washington lobbyist,” she said in the statement. “Could Florida Republicans have assembled a primary field more out of touch with middle class voters than these four?”

Early polls, however, point to a wide-open race, with voters knowing relatively little about the candidates. Jolly, a Dunedin native, has longstanding ties in the politically important Tampa Bay area and served as an aide to the late Congressman C.W. Bill Young. He planned to hold a campaign-launch rally Monday night at the Republican Club of Greater Largo.

Jolly defeated Sink, a former state chief financial officer, in a March 2014 special election after the death of Young, who served in Congress for four decades. Jolly easily won re-election to a full term in November.

The decision to enter the Senate race came as Jolly’s congressional district is poised to be redrawn because of a Florida Supreme Court ruling this month. That ruling ordered state lawmakers to redraw eight districts, which the Supreme Court found violated a 2010 constitutional amendment aimed at ending gerrymandering.

Jolly’s redrawn district is expected to get an influx of Democratic voters, making it harder for Republicans to hold onto the seat. Former Gov. Charlie Crist, a Democrat, has been widely mentioned as a possible candidate in the redrawn district.