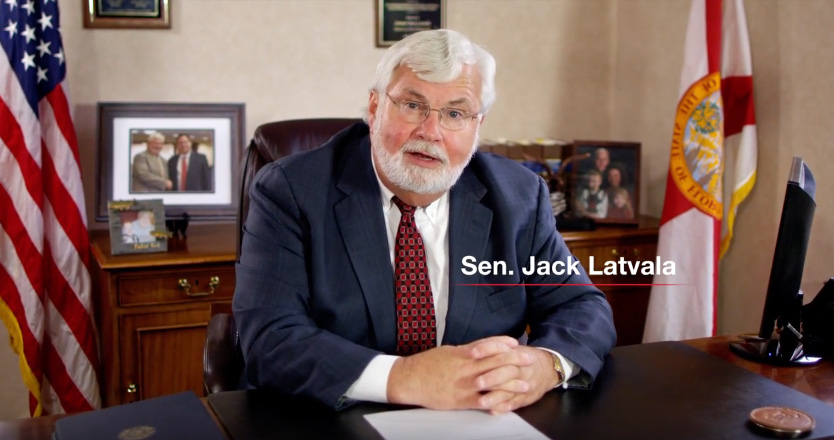 Sen. Jack Latvala, a Clearwater Republican, joined the 2018 race for governor on Friday, filing papers to make his campaign official.

“My papers were filed by 5-year-old Rays fan Cooper Bishop!” Latvala tweeted shortly after noon, including a picture of the smiling boy in a Tampa Bay Rays uniform holding the candidate’s paperwork.

Latvala, 65, chairman of the powerful Appropriations Committee, is a veteran lawmaker, serving 15 years during two stints in the Senate. He was first elected in 1994 and returned in 2010.

Friday’s announcement was not a surprise. He will formally kick off his campaign on Wednesday, with stops in Hialeah, Clearwater and Panama City.

Since the 2017 session ended, Latvala has been crisscrossing the state, with a meeting this week in Palm Beach County to talk about the opioid crisis and an appearance in Blountstown last week to talk about the need for more economic development in rural regions.

On Friday, Latvala was in Steinhatchee, where he has a home, for another economic roundtable. On Sunday, he will be on a political talk show hosted by an Orlando television station.

“As a small business owner and public servant, I have a track record of getting things done and solving problems,” Latvala said in a statement announcing his Wednesday itinerary. “One thing you can always expect from me too is when I give you my word, I will keep it.”

Latvala’s entry into the governor’s race is likely to complicate the looming 2018 legislative session, which begins in January, as House Speaker Richard Corcoran, R-Land O’ Lakes, is another potential gubernatorial contender.

Last week in Blountstown, Latvala sharply criticized Corcoran, saying the House’s efforts to overhaul Visit Florida, the state’s tourism marketing agency, were “all about making political points, all about trying to make headlines, trying to raise your name identification, whatever.”

Corcoran defended the legislation as an effort to bring “more transparency and accountability” to the marketing program.

Although Latvala is well known in the populous Tampa Bay region, he has never run in a statewide race and will have to raise his profile across Florida.

An early test will be his ability to raise money. A Latvala-affiliated political committee, known as the “Florida Leadership Committee,” raised $362,154 last month and the committee had about $3.84 million available as of the end of July

But that compares to the more than $12.3 million that Agriculture Commissioner Adam Putnam, the leading candidate in the GOP gubernatorial primary, had on hand through the end of last month.

The Republican field seeking to follow Gov. Rick Scott, who cannot run for re-election because of term limits, is likely to grow more crowded. In addition to Corcoran, U.S. Rep. Ron DeSantis, R-Fla., has said he is interested in the race. A political committee that supports DeSantis had raised nearly $1.3 million through the end of July.