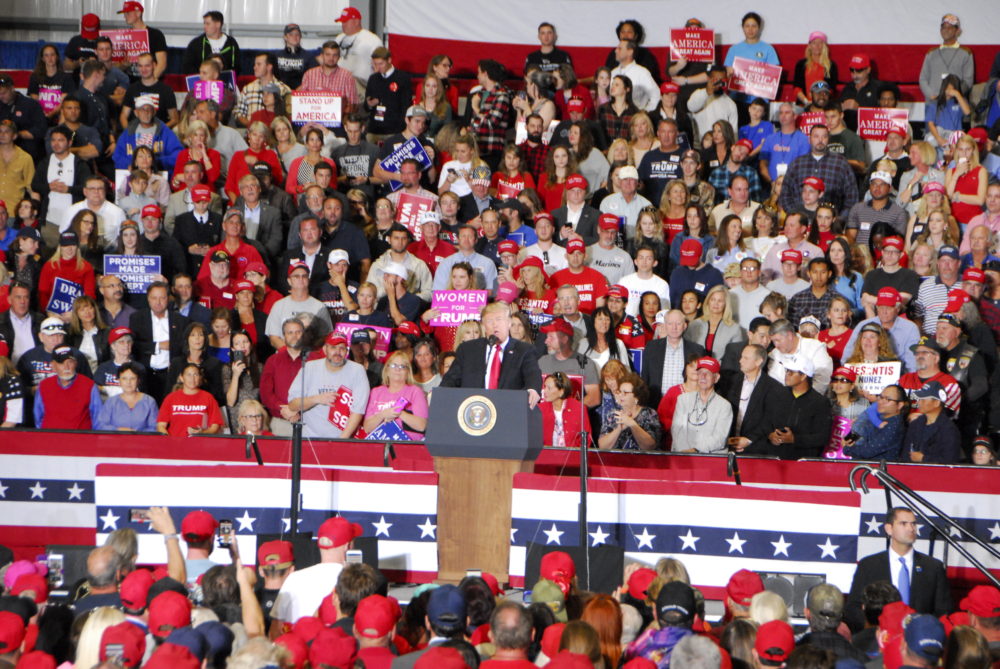 No one had to twist President Donald Trump’s arm about coming to Pensacola. According to Northwest Florida congressman Rep. Matt Gaetz, when he approached the president about campaigning in the state ahead of the Nov. 6 midterms, a Panhandle stop was prerequisite.

“He said, ‘Matt, I will go anywhere you want me to, as long as I can come to Pensacola,’” Gaetz told the rally crowd gathered inside ST Engineering’s hangar at the Pensacola International Airport Saturday night.

Trump has visited Pensacola on numerous occasions — be it for campaign rallies or to wish Roy Moore a Merry Christmas — and he seems to like the area. And why not, it’s reliably red with a crowd always ready to whoop it up.

“It sounds like a big Florida State — or Florida — football game,” Trump would comment later, soaking in the roar of the rally crowd. “It sounds like a stadium on television. In many ways it sounds better.”

The crowd for Saturday’s rally began arriving early in the day, filling a makeshift parking lot set up on fields along Langley Avenue across from the airport. They formed a long, snaking line past vendor tables and food trucks, countless red MAGA hats bobbing upon the surface of the crowd as they waited for one of the looping school busses to shuttle them to the rally.

Set up in a prime location on the corner near the shuttle stop, Bob Kunst enjoyed what he said was his 126th Trump rally. The Miami man wore a Star of David pendant around his neck and a Hillary Clinton mask. He’s following the Trump train along its stump tour. 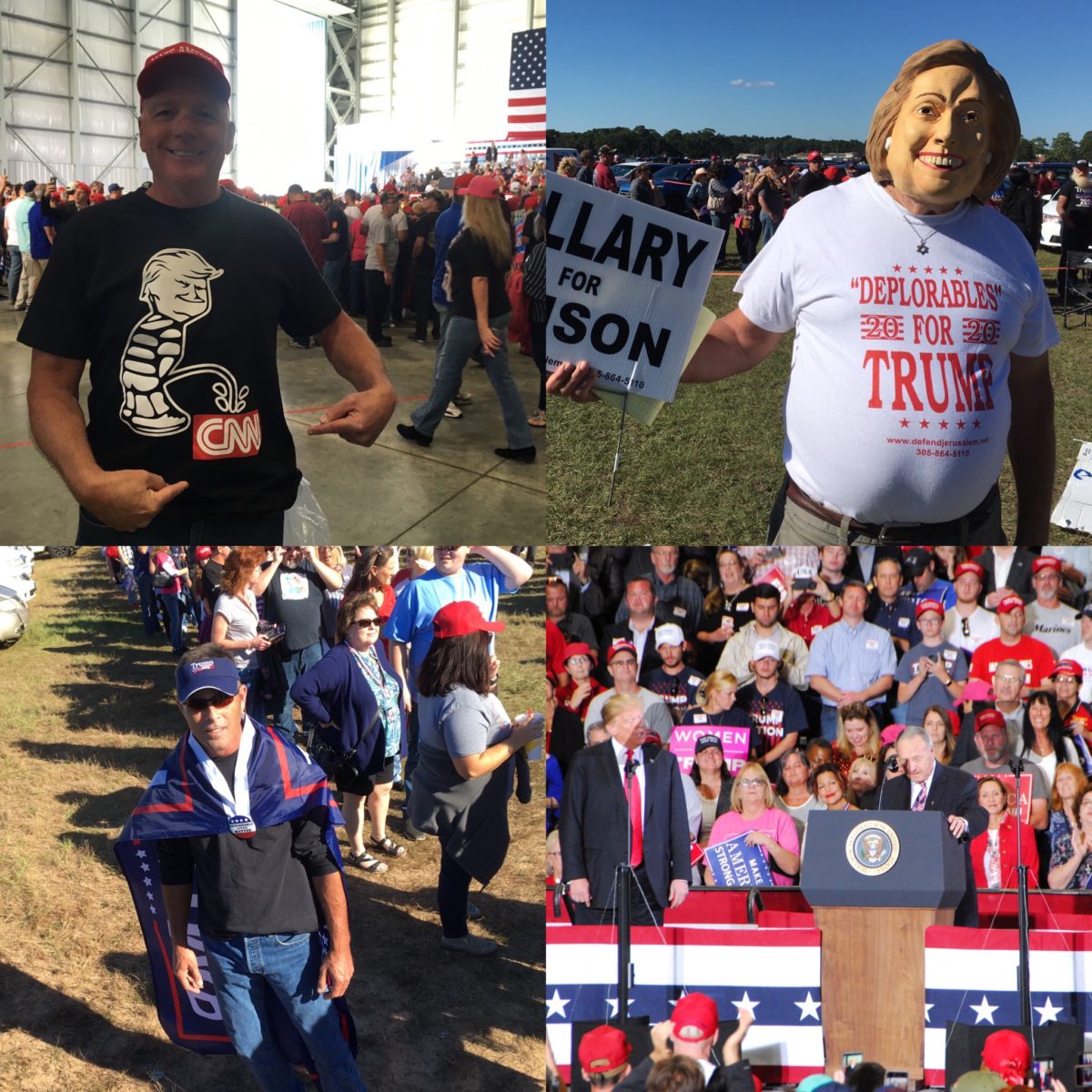 “Yeah, tomorrow I go to Macon,” Kunst said, pushing the Hillary mask up on top of his head.

Though he identifies himself as a registered Democrat (or “Demo-rat”) and gay activist, Kunst said he is on board with a number of Trump’s initiatives. He particularly appreciates how the president relocated the U.S. embassy in Israel to Jerusalem and also how he ditched the Iran nuclear deal, which he described as “disgusting.”

“Don’t forget about Hillary!” Kunst slid the mask back over his face and waved a Hillary-for-Prison sign at passerby.

Further down the line of people waiting for shuttles, a television news correspondent stood on top of a SUV preparing for a live shot. The slowly moving line of people recognized him from Fox News and began to cheer.

“Hey all you wild animals,” the correspondent called out, “let me hear you! Have fun in there!”

At a vending table, Keisha Jenkins offered an array of Trump-fare, as well an assortment of conservative-themed options, such as a t-shirt featuring an uzi-packing somehow-still-adorable panda with the phrase ‘Right to Bear Arms.’

Jenkins is from Michigan and made the trip to Pensacola to help her brother vend Trump gear. Her brother follows the campaign trail. The pair is traveling a bit lighter after unloading a bunch of merchandise during an Indiana event. She declined to discuss politics.

“I wanted to see what it was like,” Jenkins said, looking around at the people filling the parking area. “This here is off the hook.”

Waiting in line, William Biggs wore a large Trump flag as a cape, affixed to his neck with a button that read: ‘Deplorable Lives Matter.’ He couldn’t be happier with the president’s performance thus far.

“I think he has flipped the table over on corruption in Washington,” Biggs said.

Biggs is with his wife, Kim Biggs, also supportive of the president. She said Trump relates to the “common folk” and brushed aside concerns about his demeanor and rhetoric.

“I like his demeanor,” she said. “I think it’s like me and you having a drink on the back porch. He talks just like you and I.”

While William was confident that Republicans will have a good showing in the midterms, Kim was more cautious in her predictions.

Once folks made their way through the shuttle line and were ferried to the hanger for the rally, volunteers supplied them with signs — Finish the Wall, Jobs Not Mobs, Drain the Swamp — and they began listening to a soundtrack alternating between newscast replays of Trump’s 2016 election night surprise and a heavy rotation of Lynyrd Skynyrd’s “Sweet Home Alabama” and “Freebird.”

Waiting for the rally to begin, attendee Jeff Lloyd took a moment to discuss his assessment of Trump. A veteran of the oil and gas industry, he’s happy about the president cutting regulations, and also appreciates his hard stance on immigration issues. While Trump may be rough around the edges, he said, he’s preferable to his predecessor.

“Obama was a great orator, a nice guy, but he’s full of shit,” Lloyd said. “Trump, he could tone it down a bit, but it doesn’t bother me.”

Lloyd is from Houston. He missed a recent Houston rally and decided to attend the Pensacola engagement because he was already in the area. He sees parallels between Florida’s races and the senatorial race in Texas pitting Republican Sen. Ted Cruz against Democrat Beto O’Rourke.

“Where’d you get that shirt,” a man asked Lloyd, laughing approvingly at the message.

Lloyd’s t-shirt featured a variation of the traditional Calvin-pees-on-target-of-derision cartoon, with Trump urinating on the CNN logo. He said he thinks CNN presents a slanted perspective, preferring to phrase their reporting as “guilty by omission” rather than fully commit to the “fake news” description.

“Everything is presented through a prism of hating Trump,” Lloyd said. “I go on there just to laugh at how outside the mainstream of America they really are.”

When asked if the Trump’s rhetoric concerning the news media — consistently referring to the press as “fake news” and “the enemy of the state,” singling out CNN for particular scorn — contributed to an environment in which a Florida man recently mailed a series of pipe bombs to critics of Trump, including the offices of CNN, Lloyd doesn’t see a connection.

“There’s been nut-jobs forever,” he said. “I don’t hang that on Trump anymore than I hang anything on Obama, you know, the Ferguson riots, the Baltimore riots.”

Eventually, all of the attendees made their way into the airport hangar and a slate of state GOP candidates began presenting pep rally pitches. There was Rep. Jeanette Nunez, a state congresswoman from Miami who has joined GOP candidate Ron DeSantis on the gubernatorial ticket, as well as Republican candidates for attorney general and agriculture commissioner.

Then, Rep. Gaetz steered the rally towards the main event, whipping up the crowd into chants of “Build that wall!” and describing Trump as “the greatest jobs president God has ever created.”

“We will make Florida red! We will make America red!” Gaetz shouted, encouraging the crowd to vote in the midterms.

When Trump arrived at the rally he exited Air Force One and made his way on stage to the sounds of Lee Greenwood’s “God Bless the USA,” it was obvious he was happy to be back in town.

“Look at that crowd. That’s a nice crowd,” Trump addressed the rally. “If this election is based on crowds they might as well cancel it because we’ve won.”

The election, of course, is not based on rally crowds, but rather votes. Which is why Trump has been furiously campaigning in states where races look tight and the GOP is sweating potential losses. In Florida, the president has been stumping primarily for DeSantis, as well as senatorial hopeful Gov. Rick Scott, both of whom accompanied Trump to Pensacola.

DeSantis and Scott would each make their respective appeals to attendees later — basking in Trump’s glow, and warning against their respective opponents, Mayor Gillum and Sen. Bill Nelson — but first, the crowd was treated to what they came to see: the Trump show.

This particular episode of the Trump show featured a couple of surprise guests. After noting that “sports are kind of like a microcosm in life,” Trump introduced first boxer Evander Holyfield — “I made so much money on Evander!” — and then longtime Florida State University football coach Bobby Bowden.

Bowden was ushered to the microphone to make a few remarks and proceeded to give a locker room halftime talk that stressed the importance of enlisting quality players and casts DeSantis and Scott as a winning team. The FSU institution then threw out a notion that veered into the weird.

“I want to make one more statement about this man” the coach said, “now see if you think this is true: Trump plus God is a majority.”

It didn’t make a lot of sense, but that didn’t seem to matter. The crowd ate it up and so did Trump.

“You see that?” Trump said, grabbing Bowden’s hand and holding it up to the crowd. “That’s a national championship ring!”

For trivia’s sake, it’s worth noting that Bowden’s appearance marked the second coach named Bobby to endorse Trump in as many days. During a Nov. 2 rally in Indianapolis, former Indiana University basketball coach Bobby Knight appeared with the president; in addition to holding the third winningest career in NCAA history, Knight is known for physically abusing players and throwing a chair onto the court.

Throughout the course of his own remarks, Trump leaned heavily on go-to themes like economics and immigration, touting tax cuts and warning of the approaching “caravan” of immigrants heading towards the country’s southern border. He urged attendees to vote for Republicans in the upcoming election, which he described as “a big one,” and warned of dire consequences if “radical Democrats” were to win office.

““They’ll impose socialism on the state of Florida — welcome to Venezuela!” the president said, (he’d level the same charge against Georgia Democrats during a rally the following day).

Trump also spoke about how, in his view, the country is “winning again” and is “respected again.” He talked about how the stock market is higher, the job market is better, regulations are being cut and the military is getting “bigger, better, stronger than ever before.”

No one at the Pensacola rally seemed to need convincing on these points. They, too, are pretty sure that Democrats are out to “destroy your jobs” and “undermine your safety,” to “flood your cities with criminal aliens.” They too are sure that GOP losses in Florida would result in “a total nightmare.” They are sure the dark of night is fraught with Democratic boogeymen with names like Hillary, Nancy and Schumer.

But, while Trump may be preaching to the choir at his rallies this campaign season, there are other voters — the so-called blue wave making the GOP so nervous — that feel differently. Polls in Florida, for example, are not encouraging for either DeSantis or Scott, with their Democratic opponents holding slim leads.

DeSantis may have summed it up best when he addressed the rally in Pensacola.

“Is this Trump country or what?” DeSantis shouted to the cheering crowd.

The question was meant rhetorically in the context of the rally but taken on its face the query could also serve as the marquee billing for Trump’s current run of campaign events. With the midterms serving as the first national election since the president’s 2016 win, is Florida still Trump country?