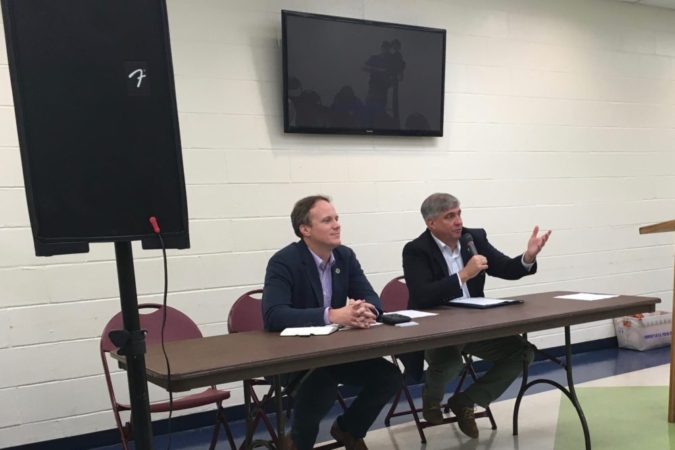 With a drizzly evening raining down outside, Pensacola Mayor Grover Robinson and District 4 City Councilman Jared Moore hunkered down inside the Vickery Community Center Tuesday for a town hall with area constituents.

Over the course of the town hall, citizens were able to ask questions and bring up issues of concern to the elected officials, acting as what Councilman Moore described as “eyes on the street.” Much of the conversation centered on traffic and road related issues, but there was also talk of landscaping, education and the private ownership of streets.

One of the residents in attendance Tuesday night was former city councilman Rhett Anderson, who offered up this nugget: “Progress produces problems that need to be foreseen.” Among the issues he brought up was a traffic uptick on Summit Boulevard, just outside the Vickery Center.

Mayor Robinson said that the city planned to put in a crossing area with a light near the fire station on Summit — “when that light blinks you’re suppose to stop” — and that the designated crossing would slow traffic and make the roadway safer for pedestrians.

The mayor also steered the conversation toward the concept of making the city more walkable, or pedestrian friendly.

“We can encourage ways to be more walkable,” Robinson said, explaining that the effort would require “changing behavior patterns.”

Noting that the notion of walkability — as well as concepts emanating from the likes of CivicCon — is more associated with the urban area of downtown, one man in attendance questioned whether city officials and were overly catering to the “downtown crowd”: “There’s much more to Pensacola, the city of Pensacola, than downtown.”

Robinson disagreed, contending that issues like walkability were relevant throughout the city, and also pointing to efforts to engage individual neighborhoods and energy expended in areas away from downtown, such as bringing ST and its associated aviation technician jobs to the Pensacola International Airport and surrounding neighborhoods.

“I don’t think this is just a downtown thing,” Robinson said.

Councilman Moore spoke directly to CivicCon’s relevance throughout the city, saying many of the themes addressed in the events were much broader than any particular area of Pensacola.

“Certainly a lot of CivicCon has centered on urban design, but it’s not limited to that,” Moore said, offering up as examples presentations pertaining to selecting a new superintendent of schools or dealing with the opioid crisis.

Another issue that arose was the lack of blooms on the crate myrtles along Summit.

“Are we not pruning them and feeding them?” an attendee asked “I keep waiting for some nice full blooms. They’ve been there for years.”

Robinson explained the previous administration had outsourced much of the work like landscaping, and thus the city had limited control over such issues and that was presenting “maintenance challenges.”

“We’re working on creating some crews,” the mayors said, explaining that there were plans to begin handling such tasks in-house and as needed.