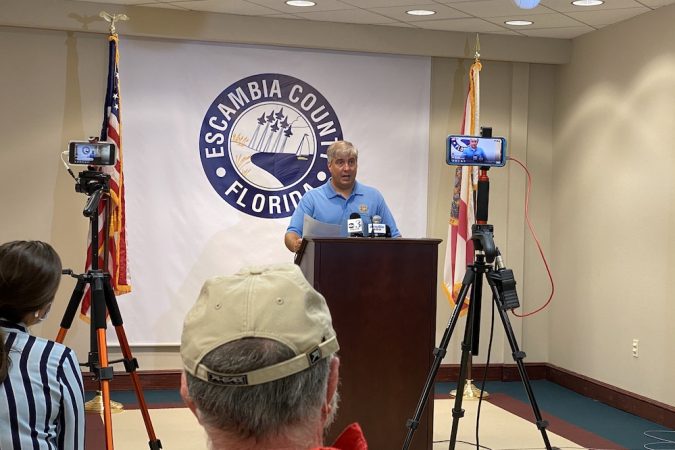 “These hurricanes have tracks and have models,” Robinson said. “They are not Disney World rides, they do not have to follow exact tracks.”

Last week’s Hurricane Sally was forecast to hit comfortably to the west of Pensacola, but instead veered east and gave the region Category 2 walloping. During his weekly presser, conducted this week from the Escambia County Emergency Operations Center, Mayor Robinson said he thought Panhandle residents should have been more prepared for Sally’s impact — “we’ve got to be prepared better” — which has caused extensive damage and flooding, as well as blanketing power outages.

“I don’t think a lot of people took this serious from the beginning,” the mayor said, stressing that the area should remain vigilant during approaching storms despite the forecast. “If there’s one in the Gulf, you’ve got to be prepared, you’ve got to realize it could turn.”

For weeks now, Mayor Robinson has eyed the local coronavirus hospitalization data and considered when to rescind the city’s mask order. Originally, he pegged the threshold at 75 hospitalizations, but noted healthcare officials were pushing for 50.

Although there are still more than 12,000 COVID cases locally, the local hospitalization count has continued to trend downward. That number has now dropped to 50 individuals.

“We haven’t been this low since the council passed its mask ordinance,” Robinson said, referring to earlier in the summer as the overall numbers began their alarming climb.

The mayor said that he would be asking the Pensacola City Council to drop the mask order, while maintaining the current state of emergency declaration. He rationed that requiring people to wear masks while in businesses and indoor public spaces as the hospitalization number dropped would conflict with the order’s original purpose and potentially erode public confidence in the mandate.

“We feel like at this point telling people to do it is counter productive,” Mayor Robinson said. “Because when we need people to do it, we want to bring that tool back out.”

The mayor said city’s emergency declaration order would be left in place to allow the city to bring back the mask order if COVID numbers started to rise: “If we see numbers go back up we’ll immediately jump on that.”

When the city initially instituted its mask order, Robinson said that business owners and frontline employees, such as grocery store workers, had thanked him for enacting the order, explaining that it made them safer and gave them an authority to point to when customers balked at wearing a mask. On Monday, the mayor said that he didn’t think dropping the mask order put businesses in a disadvantaged position on this front, contending that private businesses could still require masks even without the order.

“They have the ability to do that right now,” Robinson said. “Private businesses are perfectly able to put in place a mask mandate. City hall will do that. Any business can do that.”

When Hurricane Sally blew through, a number of barges — belonging to Skanska USA, the company constructing the new Pensacola Bay Bridge — were scattered. One of the barges took out a chunk of the bay bridge, which serves as the route between Pensacola and Gulf Breeze, as well as Pensacola Beach.

Robinson said Monday that city officials were actively assessing the issue and trying determine workarounds. One possibility is employing ferries, but that would only accommodate passengers, not vehicles.

“There is nowhere in Santa Rosa County with a deep enough draft to do cars,” Robinson said. “So, cars are off the table.”

Also off the table, for the moment anyway, are the U.S. Department of the Interior ferries used for runs between Pensacola and Pensacola Beach, as they were damaged by Sally and require repairs. But, Mayor Robinson said a FEMA official touring the area had suggested he inquire about a DOI ferry used on the Mississippi River as a substitute for now.

“There are other ferries out there,” the mayor said.

Robinson suggested that for the time being, people needing to make daily trips between Gulf Breeze and Pensacola plan to carpool for the circumnavigational drive — “If I lived in Gulf Breeze, I’d start talking about that” — and said that city officials would continue discussing the matter with other entities — “we’ll work with DOT, Skanska, whoever” — and would hopefully know more in a week.

“To me, these are the kinds of things Skanska needs to be figuring out,” the mayor said. “I mean, the city of Pensacola didn’t leave the barges out there.”

For now, the city of Pensacola is continuing a practice adopted as the coronavirus pandemic set in and will facilitate public participation in public meetings via virtual means. That could soon change, however.

Robinson said Monday that the city council could decide to resume in-person meetings soon. Asked if the city should immediately open up meetings, as many residents are still without reliable internet service in the wake of Hurricane Sally, the mayor said he thought the city council should do so.

“I think we should begin having people back in,” Robinson said.

The mayor said that if in-person meetings did return, attendees would be socially distanced — even if that required a rotating audience in the public gallery — and also required to wear masks.

Robinson also said he felt the city’s online operations during the pandemic had been plenty accommodating to the public. Possibly, he said, the virtual participation method made the city more accessible than ever.