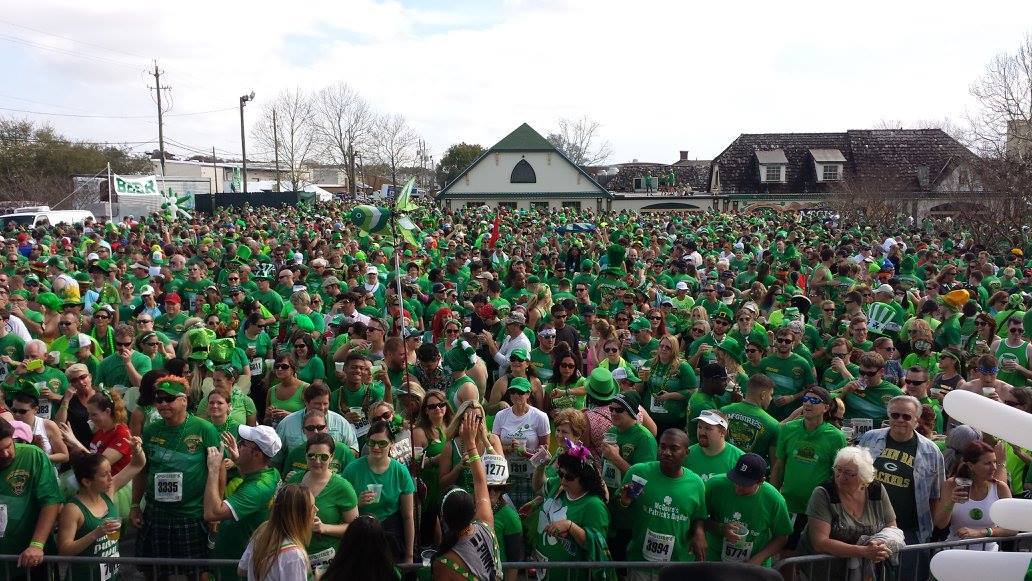 America’s Largest Prediction Run expects record attendance in Pensacola this March. An estimated 15,000 runners from across the country and the pond are expected to participate in the 40th annual McGuire’s St. Patrick’s Day 5K Prediction Run in Pensacola on March 11.

The race is the largest prediction run in the country, with thousands of participants, dressed in green, raising green for charities.

The run was designed four decades ago as a fun way to celebrate St. Patrick’s Day and also raise money for charity. This year the run benefits the Marines Semper Fi Fund, the Pensacola Police Department, the Boy Scouts of America Troop 104, and other local charities.

The race starts and ends at McGuire’s Irish Pub, a nationally known restaurant famous for its ceiling of cash: over $1 million and counting of signed dollar bills hang from the pub’s rafters.

“Since Molly and I organized the first race 40 years ago, McGuire’s has been able to donate hundreds of thousands of dollars to charity. We never imagined that this event would grow to thousands of runners a year, coming from all over the world,” said owner McGuire Martin.

“Our pub is about family, community and tradition. The race embodies all of those things,” he furthered. “We are proud to host it each year, and we are particularly grateful for all those who attend.”

The 5k Certified Course (3.1 miles) starts and finishes at McGuire’s Irish Pub in downtown Pensacola. Participants must be able to run or walk 3.1 miles in under one hour. The course will open to traffic at 10:00 a.m. Stragglers will be picked up by McGuire’s bus.

And, many runners who attend won’t leave empty-handed. McGuire’s hands out more than 100 trophies and awards in the following categories:

Team Speed Awards: Trophies will be awarded to the first three teams in each division: Male, Female and Military (active duty, reserve or ROTC.) A team is at least five but no more than seven runners. The first five finishers will score for the team. Teams must submit their registrations together and with the team name and category on the application. No team registration or changes will be accepted on Race Day.

Finish Line, Scoring and Results: Participants are asked to stay in order as they enter the finish line chutes. We cannot begin scoring the Prediction Run until all participants have crossed the finish line. Results will be posted on Mcguiresirispub.com and event-tech.com. To comply with insurance guidelines: No strollers, skates or bicycles allowed on the course. No dogs allowed, per city ordinance.

Online registration is $30 and is open until Wed., March 8, at midnight. Sign up to receive email or text alerts regarding race details and your race results. Race day registration is $35 and ends Saturday at 8 a.m.