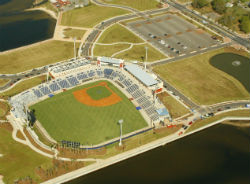 “As of the end of last week, MCM-BAP informed CBRE that their research suggests that the market will not support the residential development they would like to build without agreement of the formerly proposed financial terms and concessions from the City,” said CBRE. “Those terms and concessions are described in MCM-BAP’s most recent proposal. MCM-BAP remains interested in the project and is communicating with other potential niche development partners.”

CBRE recommended that the City pursue a ground sublease for Parcels 3, 6 and 9 with Studer Community Development.

The real estate broker said, “CBRE stands ready to represent the City in the negotiation of those subleases in accordance with our contract for which CBRE will be paid a commission. We await further direction from you to complete that transaction.”

Ironically July 23 was the day that Mayor Ashton Hayward and City Council President Andy Terhaar issued that their rejection of the leases approved by the CMPA board, and Quint and Rishy Studer decided to withdraw their proposal. The CBRE’s offer to negotiate was made too late. Mayor Hayward had hired the Beggs & Lane law firm to do the negotiations.

Could CBRE have saved the deal?