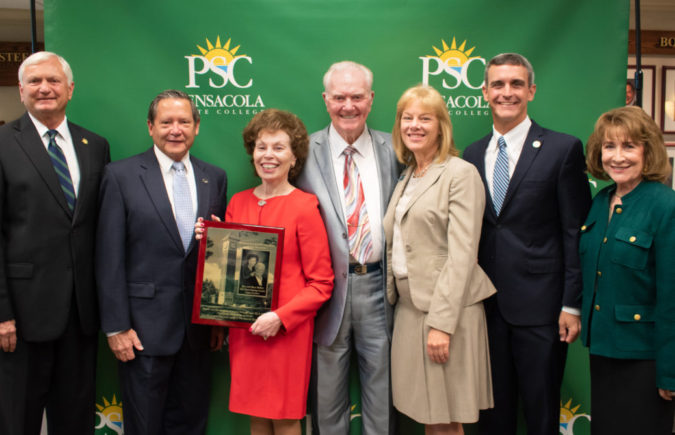 Pensacola State College was named as beneficiary of a $2.5 million Charitable Remainder Unitrust (CRUT) established by Ron and Jan Miller.

The Millers have long been active leaders in the community and say they are happy to establish the CRUT with the sale of their business, Arco Marine, and real estate holdings.

“My husband’s father was in the Navy and they were stationed here in Pensacola when he was a little boy. He always wanted to come back. After we did move back here from Washington, D.C., we were sure that we wanted to stay. So when you have a multitude of blessings, you have a social responsibility to the community in which you live,” explained Jan Miller of their reason for selecting the College as the CRUT beneficiary.

“Escambia County has one of the highest percentages of poverty of any county in Florida. So we thought about what would be the best way to help our community – the citizens, the economy, the environment. An education is the best ticket out of poverty and a strong workforce will bring new industry to our area. It is a WIN-WIN. Pensacola State College offers everything from a GED to a four-year bachelor degree. That is why we made the gift we have to Pensacola State College.”

“It is admirable that Jan and Ron Miller have named Pensacola State as the sole beneficiary of their trust. This planned gift, I am sure, is based on a love of community that started when Ron’s father was stationed in Pensacola while in the Navy,” Meadows said. “I believe this gift to PSC signifies the Millers’ recognition and appreciation of the College’s commitment to our military community and the role we play in workforce training for our veterans and their dependents.”

Recognition of a history of philanthropy in the community was received by Jan Miller in 2018 when the Association of Fundraising Professionals of West Florida named her Philanthropist of the Year.

The Millers have been highly supportive of local needs being met through area nonprofits and the arts. Their funding and influence has resulted in positive impacts on the College, Manna Food Pantries, Pace Center for Girls, Pathways for Change, the Pensacola Opera and Ronald McDonald House Charities of Northwest Florida.