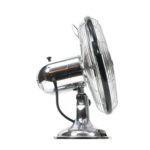 This venue is newly remodeled. I spoke to debate hosts who indicated during an inaugural event (Candy Crowley) last week it was uncomfortable on the stage. They said they would have fans available for both candidates, the hosts told me they tested fans, and had an outlet available for a fan, and that no candidate would be forced to be uncomfortable. I sent back the debate agreement which included my addition reflecting our discussions. I checked and the hosts said they received it. It read: “with understanding that the debate hosts will address any temperature issues with a fan if necessary.”

Here is the actual agreement. http://chrl.ie/debate-rules