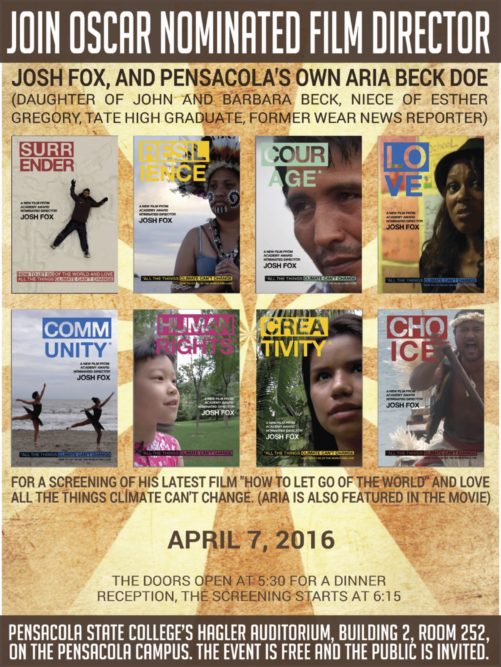 Academy Award Nominated Director Josh Fox and Pensacola’s own Aria Beck Doe are screening in Pensacola in support of the challenges Pensacola and the Northwest region faces with Climate Change Impacts like the recent tornados, alternative fuel needs and options, as well as Environmental and Social Justice issues…like Toxic Waste and Pollution and ongoing Superfund destruction.

Aria Doe is a Pensacola native with strong roots in the community (John and Barbara Beck are her parents, she is a Tate graduate, and former WEAR TV reporter).

Her New York-based nonprofit, www.theactioncenter.com , has garnered national attention and acclaim for its work during Super Storm Sandy and its empowerment over the last 15 years of 66,000 residents in an impoverished New York community. Her work was featured in Josh Fox’s latest movie and she, her center and their work are the subject of members of the same production team who brought you the “How to Let Go” next documentary.

The Pensacola story will be an ethical part of the new documentary as well. It’s important that Pensacola turns out on April 7th, to help tell the story.

Josh Fox—An Environmental Advocate and Oscar nominated movie director, who’s last movie (GASLAND) was seen by 51 million worldwide, and was nominated for an Oscar, received an Emmy and Sundance film festival award and shed so much light on the environmental issues of Fracking it helped lead to it becoming a household word, being banned in many states, and part of the current presidential debate.

Fox’s latest film “How To Let Go Of the World and Love All the Things Climate Can’t Change “, howtoletgomovie.com , in which Aria Beck Doe and the Action Center are featured; premiered at the Sundance film festival in January and will be shown on HBO June 27.

In it he continues in his deeply personal style, investigating climate change – traveling to 12 countries on six continents, the film acknowledges that it may be too late to stop some of the worst consequences and asks, what is it that climate can’t change? What is so deep within us that no calamity can take it away? Join Us on April 7th in helping to give those answers.

Doors open at 5:30 p.m. for a good southern meal and the screening starts at 6:30 p.m. with Q&A to follow.
Seating is limited, so share with your networks & RSVP as soon as possible to secure your spot.