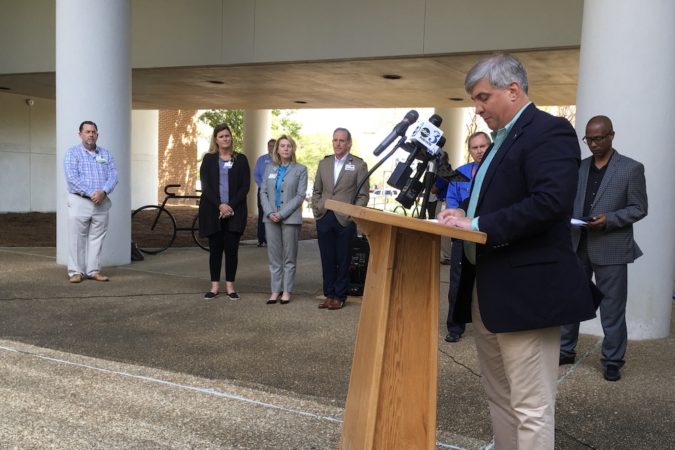 The open dialogue gave the public unprecedented transparency on our city and county is battling the COVID-19 virus. Unfortunately, County Administrator and her PIO Laure Coale weren’t in attendance to see how to run a press conference.

The following are Jeremy Morrison’s and my reports on the presser.

In an effort to limit the spread of COVID-19, the city of Pensacola is ordering all restaurants, as well as a slate of other establishments, to close up shop by Monday. The closure order is for two weeks.

“None of this was an easy decision to make, because we understand the financial impact this is gonna have. But at the end of the day we believe it’s the right move,” said Pensacola Mayor Grover Robinson Thursday afternoon.

Escambia County Commissioner Lumon May said that the county will be taking up the issue Friday morning at 11 a.m.

“We will make the decision based on the best advice from our healthcare professional, our state officials, the CDC, and our decision will be based on what’s in the best interest of our citizens, our employees and our community,” Commissioner May said.

In addition to restaurants — which will still be able to deliver food to customers — the city closure applies to entertainment venues, such as movie theaters and bowling alleys. Florida Gov. Ron DeSantis had previously closed bars and nightclubs statewide.

Mayor Robinson noted that he was making the decision to close up establishments in where groups of people gather even thought Escambia County has only one confirmed case of COVID-19 thus far. While the area doesn’t have detected “community spread” yet — such as in other areas of the state, like south Florida — the mayor said it’s hoped that the closure of restaurants and other establishments will have the effect of minimizing that spread — the so-called “flattening” of “the curve” — which would spare healthcare providers from potentially being overwhelmed with patients.

“I think the decisions being made today by the city and considered by the county aren’t the exception anymore,” he said.

Faulkner went on to explain how, even thought Escambia only had one confirmed case, there are hundreds of tests that have been done — the first drive thru testing site was opened Monday at Sacred Heart hospital — and those tests are still pending results.

“We have hundreds of pending cases. And the turnaround time on these resultings aren’t hours, they’re not days, it’s becoming very lengthy,” Faulkner said. “Our concerns as a community is that we have the potential for community spread already.”

Dawn Rudolph, CEO of Ascension Sacred Heart, said that on Thursday alone they had tested 674 people that qualified after going through the screening process.

Currently, test results must go through the Florida Department of Health or one of the approved commercial labs. Turnaround on results should improve to a matter of hours once facilities begin in-house testing. Rudolph said Sacred Heart hoped to be testing 50 patients in house within a week, with more capacity aded over time.

In addition to closing up establishments such as restaurants, Mayor Robinson said that a curfew, from 10 p.m. to 6 a.m., was also being considered. The curfew, on which the mayor is continuing to consult with law enforcement, is aimed particularly at younger people who have been reluctant to heed social distancing guidelines.

Earlier in the week, prior to the governor closing bars and nightclubs and gathering sizes being reduced to 10 people, Mayor Robinson had hinted that more stringent policies may be on the horizon, suggesting restaurants begin to consider how to deliver food to customers. On Thursday, he said that he felt rolling out the progressively more sever policies, and doing so with some lead time, such as the three-day lead on the restaurant closures, was more palatable to people.

“We thought it would be better for citizens if we were able to transition them into this, rather than a hard stop,” he said.

Hospitals on the front-line

Both News Journal reporter Jim Little and I pushed Mayor Grover Robinson to explain the underlying facts that led to his emergency order closing bars, restaurants, movie theater and other venues inside the city limits of Pensacola.

“I think the biggest thing is the spike that has happened in COVID and the number of cases that we’ve tested,” said the mayor in answer to Little’s question. “From the very beginning I said that you need to start taking precautions.”

He explained why set the effective date for 12 a.m. Monday, March 23.

“We are trying to give everybody the opportunity to transfer,” said Robinson. “We talked about transitioning into what it is we want to come. It wasn’t a stop overnight. Even this much of this discussion, this order, we decided to make it after this weekend…We thought it would be better for citizens if we were able to transition and then into this rather than a hard stop.”

After I pushed the mayor whether he had any hard facts that prompted the order–especially considering the county has had only one positive case that was related to travel not restaurants. Baptist CEO Mark Faulkner stepped up to the microphone.

“First of all, I think the decisions that are being made today by the city and being considered by the county aren’t the exception anymore,” said Faulkner. “You can look west and you can look east in cities and counties and municipalities are making the same tough decision.”

He admitted that lag in turnaround has hampered officials from determining the spread of the virus in Escambia County.

“With respect to your question, we have seen the one confirmed case,” he said. “We have two now confirmed cases in Santa Rosa County. And yet we have hundreds of pending cases, okay? Hundreds, and the turnaround time on these resultings aren’t hours. They’re not days. It’s becoming very lengthy.”

Faulkner continued, “Our concern as a community is that we have the potential for community spread already. And if we don’t get ahead of this curve, we will find ourselves as a community, like many communities, under a significant burden. I can’t overemphasize that enough. Significant issue. This is a tough economic decision. I recognize that, and I would implore our citizens to continue to support these restaurants through take out and delivery, all the things that are still here to help support our local economy as best we can, to mitigate and minimize the economic impact.”

The Baptist CEO warned that if leaders don’t make tough decisions that we are “headed for a humanitarian impact.”

In answered my concerns about supplies–a question that I tried to get answered at the last two county pressers but was cut off.

“You’ve heard the stories nationally about limitations on testing–that’s a real issue still today,” said Faulkner. “There are also major issues related to supplies for personal protective equipment, masks and shields and gowns. That is a real issue that we are all facing, not just in our community but across the country. And if we want to collapse our ability to provide care, it’s not just bricks and mortar, it’s not technology and equipment. It’s also our people who are here to care for these patients.”

With supplies being a concerned, I asked about whether hospitals have stopped elective surgeries.

“There has been significant guidance coming out from the Surgeon General, from the CMS as well as the American College of Surgeons,” said Rudolph.”And so on Monday, Ascension Sacred Heart elected to put in a pandemic scheduling policy in conjunction with the medical staff leadership and our OR leadership. And from that time on Monday, we have seen a days increase in our PPE.”

She added, “We felt that was the right thing to do. Some days it was up to two thirds of our caseload looking at non-urgent and emergent procedures. We redeployed staff out to help with screening education, so it has been a positive step for Sacred Heart.”

I asked what was the timetable for Ascension Sacred Heart bringing in-house testing rather send samples off to state and commercial labs.

“Our in-house laboratory will be set up in 24 hours,” said Rudolph. “We have the equipment we’ve been validating, and so we’ll move to in house testing for about 50 patients or 50 collections a day.”

She explained, “Then hopefully in the next two to three weeks, we’d put in an order for more of a scalable analyzer. It will be slow at first, but at least we’ll get those turnaround times that we’re hopeful for, which should be between an hour, an hour and a half, which will help our inpatient PUIs, our persons under investigation to get faster results. We’ll work with our community and with Ascension Florida to make sure that we get people’s results to them as soon as possible.”

Inweekly Rule #151: When the reporters asks questions, you get better information.

Yes, I’m a hot-tempered jerk when it comes to reporting.  Unrepentant, unapologetic –RO 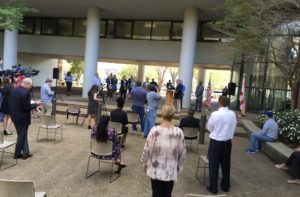