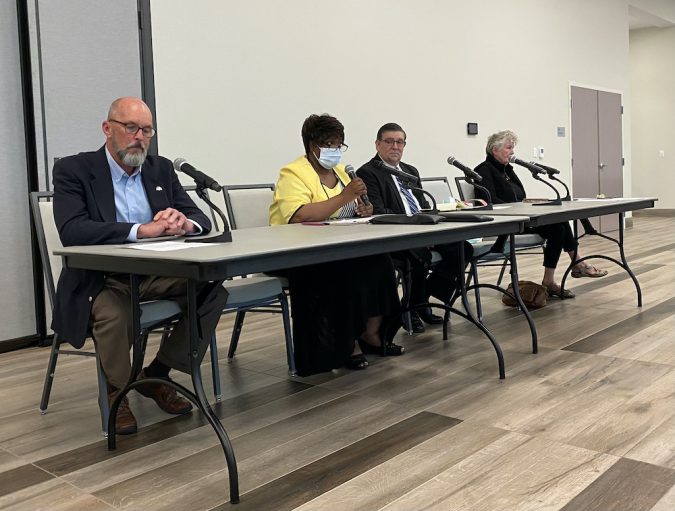 A packed hall inside the Bayview Community Center got an initial look at the field of Pensacola’s mayoral candidates Tuesday evening. Most of the field anyway.

Hosted by the East Hill Neighborhood Association, the March 15 forum offered candidates an opportunity to introduce themselves to voters, and for city residents to hear directly from the candidates on issues relevant to city affairs. Participating in the town hall were two candidates with experience sitting on the Pensacola City Council, current Councilwoman Sherri Myers and former councilwoman Jewel Cannada-Wynn, as well as two newcomers, Steve Sharp and Tim Horton; not in attendance were candidates on either end of the campaign-finance spectrum — James Hilburn with nothing in the treasure chest, and D.C. Reeves with about 20 times the amount of funds as the next closest candidate.

One of the more hot-button questions the candidates entertained during the early-season forum concerned the recent change in local power providers — from Gulf Power to Florida Power & Light — and with that a notable increase in local power bills. The city is currently in cooled franchise negotiations with FP&L, operating on a month-to-month arrangement with the company in lieu of a longterm contract; city council also briefly explored the concept of starting a municipal utility company to handle power needs in the city, but that effort did not progress beyond spirited conversations.

“My mom called me the other day and she about busted a gasket,” said Horton, relaying a conversation with his mother about a soaring power bill.

Each candidate agreed to not accept any campaign contributions from FP&L, and each stressed that any franchise agreement with the company would need to be advantageous to the city. Myers said that any agreement would need to include a buyout clause and Cannada-Wynn said she thought the city should assemble a more experienced team of negotiators. Sharp suggested that perhaps the city could engage a power provider from outside the area.

“There’s a lot of different options out there,” Sharp said.

Another issue placed on the candidates’ table during the forum was how best to respond to the area’s issue of homelessness. Recently, city officials decided to dedicate federal funds to create more shelter and services opportunities for the city’s homeless population, some of which had been camped at a temporarily-sanctioned encampment near downtown.

“Most of the people on the street corner are getting money for drugs and alcohol, and that’s just the truth,” said Sharp, lobbying for a more aggressive, punitive approach to the issue.

Cannada-Wynn said she appreciated the city council’s intent, though she said it amounted to only a “Band-aid.”

“They were compassionate and they saw the need to address it,” the former council president said.

Horton said he thought that many in the homeless community could fill job vacancies in the area: “Let’s put these people to work.”

Also discussed during this candidate forum was the issue of infill development — an issue particularly relevant in East Hill — versus urban sprawl. Each candidate stressed the importance of addressing the city’s density regulations — “We’re bursting at the seams,” Cannada-Wynn said — as well as making an effort to ensure that historic neighborhoods in the city did not lose too much of their identity with the influx of new development and that longtime residents are not forced out as development fosters gentrification and rising home values make it difficult for some residents to afford insurance or property taxes.

“Growth is good, but we’ve got to remember,” cautioned Sharp, “growth can also have a negative impact on some of the folks.”