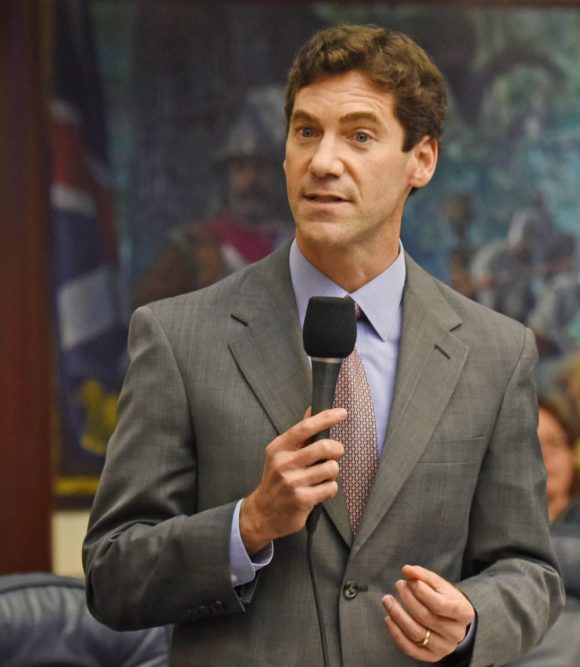 State Rep. Jay Fant (R-Jacksonville) is in the Panhandle today. He will be my guest on “Pensacola Speaks” today at 5:33 p.m.

“Big government leads to big problems,” said Fant, a 49-year-old Jacksonville Republican who is the first candidate to file paperwork to run to replace Attorney General Pam Bondi, who is stepping down after the 2018 election because of term limits.

Fant is serving his second term in the House, first winning the seat in 2014 when he beat Republican primary opponent Paul Renner by two votes out of nearly 12,000 cast. Renner later moved to Flagler County, where he was elected to the House in a special election in April 2015.

A graduate of Washington and Lee University and the University of Florida law school, Fant said he would be a staunch advocate for First Amendment and Second Amendment rights and would protect “the sanctity of life.” He also promised to use the Attorney General’s Office to fight “corporate scams that prey on the elderly and vulnerable.”

He said he would continue initiatives started by Bondi, including her efforts to curb human trafficking.

Fant blamed the federal government for its role in the 2012 failure of First Guaranty Bank and Trust Co., a Jacksonville bank his family founded in 1947 and where he had served as a director.

“During the Great Recession, the federal government bailed out big banks and left little, small community, mainstream banks like mine out in the cold,” Fant said. “Big government isn’t about Main Street. And I’ve vowed not to let that happen to anyone else.”

“The very little money that the state spends on bringing a business, to incent one to move here, is negligible compared to our overall budget,” Fant said.

He said the “economic multipliers” that a major business brings to the state benefits communities “as a whole.”

Fant also split from Corcoran on the speaker’s initiative to impose term limits on appellate judges, including members of the Florida Supreme Court.

Fant said he understands the frustration from lawmakers who believe courts are rewriting laws, but he said term limits would alter the “separation of powers” balance between the two branches of government.

“My view is that limiting the term of judges does not change whether they will be activist or not,” Fant said.

Fant said he will run a “grassroots campaign,” with extensive travel seeking to raise his visibility across the state. He was scheduled on Tuesday to make campaign appearances in Tampa, Orlando and his hometown of Jacksonville, in addition to the initial appearance in Tallahassee.

Fant was accompanied at the Tallahassee stop by his wife, Lauren. They have four children.