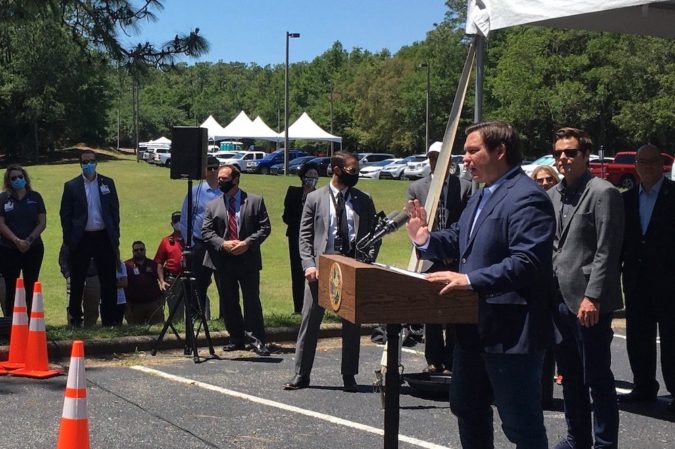 Florida is easing into a measured reopening, otherwise known as phase one. Gov. Ron DeSantis spent the days leading up to the state’s official start of the reopening process assuring Floridians that the state was ready to rollback protective measures put in place to curb the spread of COVID-19.

“We really want Northwest Florida to be a big anchor for us going forward,” DeSantis said Friday during a press event at a new drive-thru testing facility at the University of West Florida in Pensacola. “As we move into phase one, I wish we could just flip a switch and say we’re just going to be able to do it, but we’ve got to be very methodical about it, we’ve got to be careful and prudent.”

With certain, previously closed businesses, such as retail and restaurant establishments, reopening with limited capacity to encourage social distancing, Gov. DeSantis said at the Pensacola event that he felt the coronavirus-outlook across the state warranted a cautious, but confident reopening based on locale-specific data.

“You have places like Northwest Florida, that’s a lot different than New York City or Chicago or some of these other places,” the governor said, contrasting the area with COVID hotspots.

DeSantis said that the state’s reopening process would take place alongside an increase in virus testing. The new site at UWF, for example, the tenth such drive-thru site around the state, aims to conduct 400, no-threshold tests — “even if you don’t have symptoms” — each day.

“If we need more, we’ll do more,” DeSantis said. “And that’s going to be true with all these different sites.”

In addition to ramped up coronavirus-testing efforts — including a mobile unit that will travel the state and partnerships with private corporations such as Walgreens, CVS and Walmart — the governor also said that Florida will be conducting antibody tests as well.

Antibody Testing
“If you’ve got the antibodies, that means you’ve had the disease,” DeSantis said. “It means there’s some immunity in the population, we need to figure out how much.”

Pointing to tests conducted by Sanford University, as well as in Los Angeles and Miami, the governor said there’s the potential for a larger known pool of people who have carried the virus, at times asymptotically, than is being demonstrated by current testing. If this is the case, that data would impact other numbers, such as hospitalization and fatality rates.

The governor said that antibody testing around the state could also confirm that COVID-19 is “very low risk” to people under the age of 50 without existing health issues.

“It’s important to put people’s mind at ease that in that cohort, which is the bulk of our workforce, this is very low-risk,” DeSantis said.

Despite the fact that Florida continues to rack up coronavirus cases and fatalities — a longterm care facility in the area, in fact, has garnered the unfortunate distinction of having the highest number of cases of any such facility in the state — the governor said that it appeared the worst had come and gone. He cast the possibility of a recurring round of the virus in the fall, which many experts have advised is likely, as an unknown.

In the event that there is another significant wave of the virus, the governor said the state has signed a deal with Honeywell to produce 12 million N95 masks. But, DeSantis said that the state was so far looking good on protective gear and hospital capacity, which he claimed had never been an issue.

“In Florida, not only did we flatten the curve, we have more hospital beds available statewide today than we did when the pandemic began,” he said.

Brighter Days
Northwest Florida congressman Matt Gaetz, accompanying the governor at the Pensacola presser, agreed that the state looked good and ready to begin its reopening.

“We know that the brighter days for Florida are ahead of us,” said Rep. Gaetz.

The local congressman, an outspoken ally of President Donald Trump and a member of the federal task force assessing a reopening of the economy, encouraged local leaders and citizens to engage in conversations about the pace of the reopening.

“Even pass resolutions regarding the conduct you think our community is ready for,” Gaetz said. “Throughout this entire process Governor DeSantis has leaned heavily on the local knowledge of our local leaders.”

Asked specifically about a measure which has limited vacation rentals during this period of COVID closures, which have included beaches around the state, the congressman indicated that the region could soon see a return of the rentals.

“In Northwest Florida we don’t have a 500-key hotel every thousand feet, because of our density that we have,” Gaetz said. “We’re more reliant on vacation rentals and I’m confident that in the governor’s evidence-based, measured approach, the same approach he took on the frontend of this virus, that as soon as it is safe and appropriate and we enter new phases that the governor will work with our local communities to open vacation rentals.”

Beaches
Speaking of a reopening of Florida beaches, as well as other outdoor destinations such as state parks, Gov. DeSantis pointed to a recent decision to reopen beaches near Jacksonville.

“Jacksonville allowed people to run and walk on the beach two weeks ago and you heard all these howls from the Northeast media — you know, these are the same people that have subways running in these cities, which are very dangerous, but yet they’re upset about Jacksonville and they were saying all these things”, DeSantis said. “You look two weeks, now, we’re here, Jacksonville has had their cases decline, hospitalizations have declined. That’s a low-risk environment, so we’re going to continue to support activity like this that’s low-risk.”

The governor, who had noted how state officials plan to “follow the science” and “really focus on what the science tells us” when calibrating the reopening process, pointed to a recent study from the U.S. Department of Homeland Security. While the president has used the study in touting sunlight as a potential treatment, health officials have clarified that the DHS study does not pertain to treatment of infected persons, but rather indicates the summer heat may have an impact on the duration the virus can exist on outside surfaces.

DeSantis said such a study was positive news for Florida as the summer season draws near.

“There’s a great study that was done by our Department of Homeland Security, they have a bio-defense center, and they analyzed how the virus reacts under sunlight, heat and humidity and they determined that if the virus is on the surface, in direct sunlight, heat and humidity, the sunlight kills the virus quickly,” the governor said. “This virus does not like the sunshine, does not like heat, does not like humidity. So, that informs us to say, you go out to a state park, or you go out and do things that are productive, as long as you aren’t in big groups, that’s very low-risk. It’s certainly more risky going to some of these grocery stores where people are crowding.”