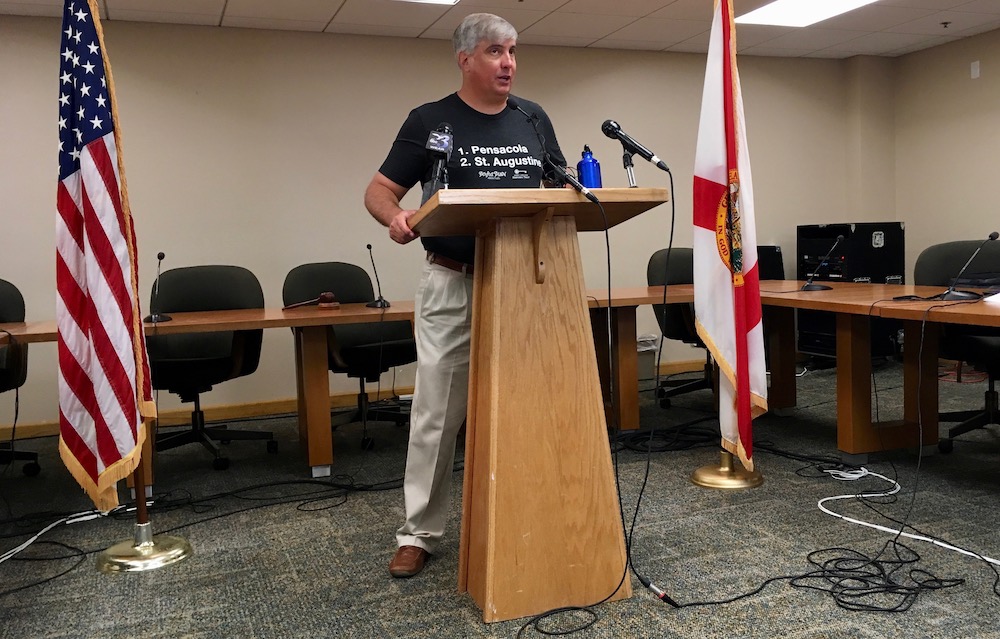 When Pensacola Mayor Grover Robinson takes a break from his weekly press conference, as he did last week on Labor Day, the news tends to pile up and make for extended affairs upon his return to the lectern. Such was the case Monday, when the mayor addressed a number of items, some new and others that have been on the table for months.

In addition to previewing this week’s public budget hearing scheduled for Pensacola City Council on Wednesday and welcoming aboard Matt Coughlin as assistant director at the airport, Mayor Robinson also discussed the debate surrounding safety improvements slated for West Cervantes, the joint city-county efforts to address the issue of homelessness, the resumption of regular town hall meetings, the federal task force aimed at addressing violence in the area, the state investigation into a police shooting and the police’s response to a more recent fatality.

When Mayor Robinson took office last year, he said he wanted to do monthly town hall meetings, rotating among the city’s seven districts. He did a few, then dropped off with the heat of summer.

The mayor said Monday that schedules were normalizing from their summer fluctuations, and that he intended to jump back onto the town halls soon.

“It’s like coming back to school starting,” Robinson said. “I’ve got to get more regular on those meetings. The summer, it was good, but we were all over the place.”

Robinson said that council President Andy Terhaar, as well as Councilman Jared Moore and Councilwoman Ann Hill— or, districts 3, 4 and 6 — were the districts next up for town halls. An event was eyed for August with Terhaar, but schedules could not be coordinated.

The mayor said that he did not yet know which of the remaining districts he’d hit next, but that the next town hall would be scheduled sometime soon. He intends to hold the next three in September and October, as well as December.

The Wall No One Wants

The Florida Department of Transportation is planning a $7.5 million project to improve safety along a stretch of West Cervantes that has grown notoriously dangerous for pedestrians and drivers. In addition to improvements including traffic signals and crosswalks, the state is also planning to run a fence-like barrier down the middle of Cervantes in an effort to steer both pedestrians and drivers to designated cross-over points.

Local officials from both the city and county, as well as residents and business owners in the area have spoken out against this barrier concept, contending that it breaks up the street grid and unnecessarily limits the flow of the neighborhood. FDOT, meanwhile, has remained unmoved.

Recently, Mayor Robinson has expressed his thoughts regarding the West Cervantes improvements on multiple occasions. He has expressed the city’s concerns in a letter and also met with FDOT officials.

“DOT made this very clear in the meeting we had, it’s for safety. And part of that is getting pedestrians to go to the right spot,” he said. “They have been, both times, fairly insistent that this is a safety project, that this was safety money, and in they’re minds they’re going to address safety.”

As the state isn’t budging on its plan to effectively limit crossing points on the street, the mayor is touting a compromise: more traffic signals.

“While I would have liked to get every opening opened, that’s probably not going to be the case with DOT,” Robinson said Monday. “My compromise to that, when they told me that, was ‘well, I was you to put in traffic lights at every opening you have.’”

In exchange for FDOT building its West Cervantes wall, Mayor Robinson said he was able to secure three additional traffic signals — on Q, L and B streets — to complement the one already slated for J Street. These additional lights, he said, would go a long ways toward slowing traffic and providing safe crossing points for pedestrians.

“We think that is going to be significant in that stretch,” the mayor said, pointing to other areas, such as the stretch of East Cervantes between Palafox and 17 Avenue, where traffic signals are more plentiful and pedestrian-vehicle incidents less frequent.

Mayor Robinson pointed out that FDOT did not feel the lights were necessary and the city was likely getting them as a form of concession regarding the state’s lack of flexibility when it comes to the median fence.

“DOT would say that the traffic signals that we’re putting in are unwarranted, which means normally they would never go in,” he said.

The mayor also said that even though FDOT would likely go ahead with a physical street divider, that enough streets had been opened to allow for a reasonably traversable distance between crossing opportunities — “the idea is no one has to go more than a block and a half to find a signalized area” — and that ultimately the wall could be reassessed if it was found to be problematic.

“If we decide something happens, people learn, we want to come back and take it down, it’s fairly easy to take a fence down,” Robinson said. “What’s not easy to get is a traffic signal that’s unwarranted.”

In April, the city, along with Escambia County and numerous community organizations — mostly non-profits dubbed “partners” — held a summit centered on the area’s homeless and issues impacting that community. Not much has happened since then on this front, but Mayor Robinson said Monday the city and county met in late August and are preparing to get moving on this effort soon.

Robinson pointed to the April summit, where he said a need was identified for a day shelter, as well as better coordination of both data and services. Local government, the mayor said, could help with some of this, but also would need to rely on the assistance of local partners.

The mayor said he feels that local government can best participate in the discussion about homelessness by working to provide an air conditioned day center where local service providers could assist the homeless community.

“What would be the highest and best use for us to do would be a day center. That continues to be my thought,” the mayor said, noting that Escambia County would be the effort’s major benefactor. “Let’s face it, they’re going to be — we’re the junior partner, we’re not going to have as much money to bring to the table as they will.”

In early July, a traffic-stop-gone-bad resulted in the fatal police shooting of Tymar Crawford. The Florida Department of Law Enforcement was expected to have wrapped its investigation of the incident by now, but the agency has yet to issue any statement.

Mayor Robinson has said that the city will release body-cam video of the event — currently in the possession of the Pensacola Police Department — when FDLE and the state attorney finish the investigation of the incident. The video is exempt from public records requests until the state investigation is closed

“Ideally we’d like to show it in a way and have it available for all the press and everybody else, other citizens, you know, people who’ve been active on issues on this, we want them to be able to be there,” Robinson said. “We’ve said we’re going to be fully open, but we don’t control the process of when it’s exempt.”

When the public does get a chance to see video of the police shooting, it will also mark the mayor’s first glimpse at the key piece of evidence. Robinson said Monday that he was holding off on viewing the video in order to remain as neutral as possible: “My position is the mayor’s office should be totally neutral. Everyone should be totally neutral.”

“I don’t make a decision related to the video, so I don’t see why I need to be any different than any other citizen of the city of Pensacola,” the mayor said. “I’m not any different that anybody else. Everyone always say, ‘well, gah-lee, you’re the mayor, you can do what ever you want.’ Well, no you can’t, you’ve got to live within the rules. I’m asking people to live within what I’ve been asked to live with and it would be hypocritical of me to be in a different position than you.”

On the last day of August, 26-year-old James Beasley called the Pensacola Police Department and said he feared for his life. A few hours later he was found dead in a woman’s backyard.

Mayor Robinson said Monday that he had been informed that PPD officers attempted to get Beasley to go to a safe location, but that the man refused. There is apparently body cam video verifying this, though this video too is exempt from records request because it’s part of an ongoing investigation.

Following the July police shooting of Tymar Crawford, as well as a series of recent shootings in the area, both fatal and non-fatal, the city of Pensacola engaged the U.S. Attorney for the Northern District of Florida to help with police training as well as combating gun violence. When announced, the partnership was touted as connecting the city to federal resources and agencies like the FBI, DEA and ATF.

When asked Monday how the task force was coming along, Mayor Robinson deferred to U.S. Attorney Lawrence Keefe.

“It’s more his operation and we’re participating in it,” he said.

Robinson did say that he welcomed the help of the federal agencies and that the PPD had been working with some of them for a couple of weeks, but — just as when the task force was announced — remained vague about the specifics of the relationship and operation.

“My understanding is that they are working with PPD, and they have been moving for at least the last two weeks on a initiative that they’ve been working — I mean, the operation, I think you heard when they were here, they weren’t necessarily gonna be discussing what they do operationally,” the mayor said, adding that the U.S. attorney may choose to elaborate at some later date.