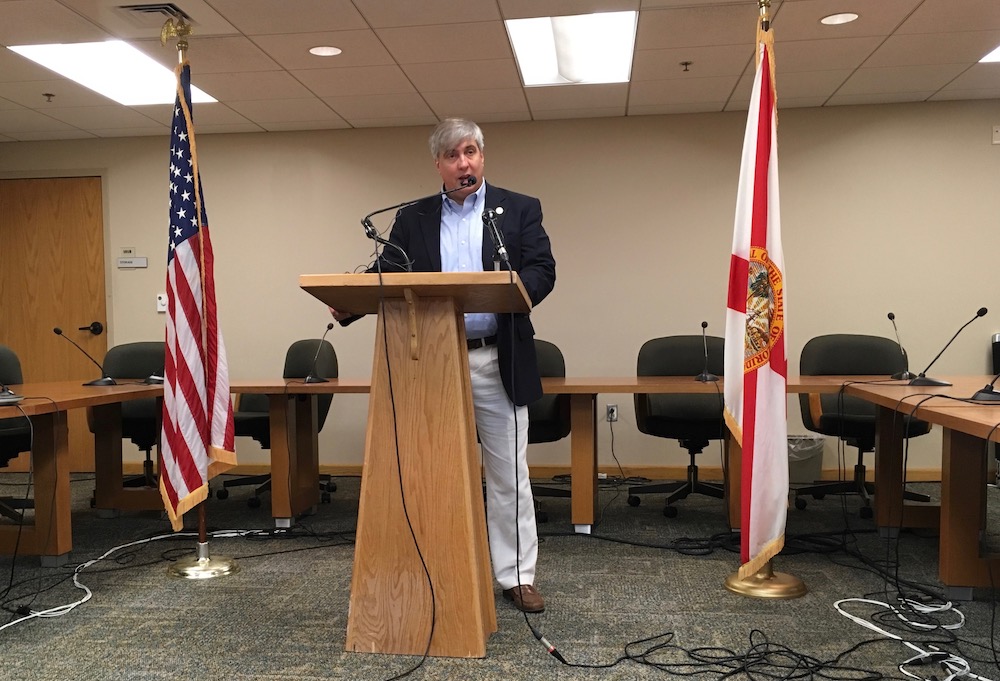 PENSACOLA CITY HALL: The baby osprey story wasn’t the most important thing Pensacola Mayor Grover Robinson talked about Monday during his weekly press conference. But it was definitely the most adorable.

Last week, the mayor explained, the city’s fire department and parks and recreation department worked to get a stranded osprey out of a tree in the right of way near Bayou Texar.

“It was a difficult rescue, but firefighters were able to maneuver the ladder between trees and power lines and safely get the osprey down,” Robinson said, explaining that the baby bird was taken to a wildlife refuge to recover.

The mayor also talked about a number of other items Monday, including the upcoming appointment of a District 5 representative on the Pensacola City Council and the ongoing conversation with the group Dream Defenders concerning police-community relations.

With the recent passing of Councilman Gerald Wingate, the Pensacola City Council is scheduled to select a new representative during a special meeting Sept. 4. Ten candidates were nominated by the deadline last Friday.

Mayor Robinson said he read the healthy field of nominees as a good sign of the city’s overall energy.

“The good news is, we have 10 people who want to do that. I think that speaks to what’s happening,” the mayor said.

Robinson refused to point to a nominee he would like to see take the seat.

“I only endorse the concept, I’m not getting involved with who they select,” he said.

The concept the mayor speaks of concerns his preference that whoever is appointed not seek the seat in the 2020 election, so as to avoid a scenario in which council selects an advantaged incumbent. The field of nominees are mixed as to their appetite for bowing out of the election when the seat opens up.

Whoever is selected for the District 5 seat must garner at least four council members’ votes. The mayor expects it to take a few rounds.

“I don’t think it will happen on the first ballot, I mean, I’d be shocked,” he said.

Following an incident in July in which a city police officer shot and killed a citizen, the community organization Dream Defenders has pushed Mayor Robinson on a number of fronts. On such front involved releasing the name of the officer involved in the in shooting, which the city has refused to do pending an investigation of by the Florida Department of Law Enforcement.

Last week, Dream Defenders dropped the officer’s name itself, which the group got through a public records request.

“I’m not sure what that accomplished, but we responded to a public records request, we had to,” Robinson said, adding that he “disappointed” about the move.

Dream Defenders has also pushed for a civilian oversight committee to keep an eye on the police force. Previously, Robinson has said he’s generally supportive of such a committee, but Monday he said he might have misunderstood the group’s intent.

“I am open to a citizen advisory committee that we’ve had before,” Robinson clarified. “Again, I’ve learned there’s some challenges in the nuances of what things are called. I thought we were all talking about the same thing.”

The mayor said that the city, as well as the police, would welcome a citizen group who assessed the data already being collected on the force’s interaction with the community (arrest stats, etc.). He also said the police needed to become more engaged within the city’s various neighborhoods. But the idea of a civilian group somehow charged with overseeing police actives is not something he appear to be up for.

In fact, in context of the Dream Defenders releasing the officer’s name, the entire community conversation begun after the shooting of Tymar Crawford appears to be in a bit of jeopardy.

“If we’re talking about respectfully working together, you’re going to find this office here to want to find ways to work together,” Robinson said. “If the idea is to press agendas and do certain other things, that’s not what we’re about. I mean, we’re about making it a better Pensacola.”