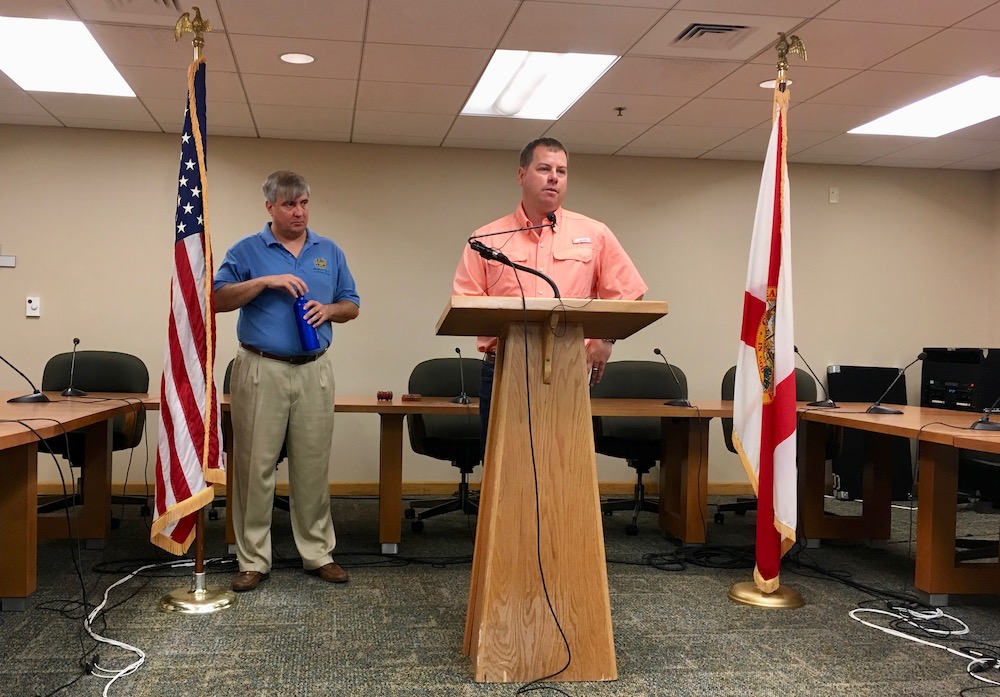 After offering his condolences to the family of Pensacola City Councilman Gerald Wingate, Mayor Grover Robinson proceeded with a press conference Monday morning that included comments from both he and Council President Andy Terhaar regarding the process by which Wingate’s District 5 seat will be filled.

Other items discussed during the presser included the current Florida Department of Law Enforcement investigation of a July incident during which a Pensacola police officer fatally shot a man; safety improvements slated for West Cervantes; the eventual departure of City Administrator Chris Holley; and the designation of the Pensacola Police Department’s downtown headquarters as a site to safely meet and follow through on private-seller online purchases.

After taking an absence from city council meetings briefly due to health issues, Councilman Gerald Wingate was recently back in attendance. Last week, however, the councilman passed away.

“Certainly it’s had an impact on all of the city and we certainly will miss Gerald,” Robinson said.

With Wingate’s passing, a seat opens up on the city council. According to the city charter, the council must appoint a new District 5 representative within 30 days.

While it’s the city council’s decision, Mayor Robinson has made a request that whoever is selected not run for the seat in 2020.

Thus far, two people — Rodney Jones and Ron Helms — have filed to run for the District 5 seat in 2020. The mayor said he has spoken to both candidates, as well as other people who were interested in seeking the seat.

Robinson acknowledged that, as per the charter, he could not actually mandate that council’s replacement choice not later seek the seat in an election, or that council couldn’t select someone who had already filed to run.

The mayor did offer up one method of seeking to ensure that the person selected by council won’t seek the seat.

“The only thing that I’ve asked [Council Executive] Don Kraher is that we have some kind of public pledge, that whoever puts their name in has to sign it,” the mayor said.

During the mayor’s comments regarding Wingate’s replacement, Council President Terhaar entered the room’s side door. He would eventually make his way to the lectern and offer up his view on the matter.

“I agree with mayor,” Terhaar said, laying out the “unfair advantage” argument for letting the replacement run in 2020. “The public perception would be that we’re endorsing somebody for that spot, which we’re not, but the perception could be taken that way. And I’m afraid that that will dissuade people from running for the position, if we put someone in there that is currently running, or has said they want to run. I think it’d discourage other people from that district, and I want as many people to run for that position that can.”

West Cervantes and Saving the Grid

The Florida Department of Transportation is planning a slate of safety improvements for West Cervantes Street, including slimming lanes and adding crosswalks and traffic signals. The improvements also call for a median in the center of the road, which features a high fence and sometimes stretches for blocks, thus reducing the points at which both pedestrians and vehicular traffic can cross the street.

Mayor Robinson said Monday that he has expressed his concerns about the lack of openings to FDOT’s secretary.

“I told him I think too much of the grid is shut off, I would have liked to have gotten some additional openings,” he said.

Robinson said that he was concerned about the impact such changes would have on businesses along the corridor, but that the state’s primary concern was safety and reducing conflict points between pedestrians and vehicles.

“We could have free access, but we wouldn’t have as much safety,” he said.

Ultimately, however, the mayor said he’s pushing to open up additional spaces in the median to allow for freer flow.

“My goal is to get two or three of those openings back up and opened,” he said. “I mean, the grid is a great grid, it’s one of the strengths of what we have, to see it blocked in any way is discouraging.”

Holley Out in December

When Mayor Robinson came into office, he brought Holley out of retirement to be his administrator. By the end of this year — Dec. 6 is the tentative date — Holley will be heading out.

“Chris has been very instrumental in helping to create the changes, I think, you’re seeing in-house,” Robinson said. “I couldn’t have done it without him.”

When Holley came on board he stated that it would only be for a short term duration. The mayor said that he was hoping for 18 months, but also thought Holley had initiated many of the items he was brought aboard to address.

Specifically, the mayor credited Holley with his work putting together an administrative team and working to develop succession plans within departments. He also said that the administrator was instrumental in putting together a Human Resources manual and pushing for employee raises.

Robinson said that the city could take its time finding the next city administrator. He pointed to Assistant City Administrator Keith Wilkins, who himself is set to retire in 2020, as being able to pick up any slack and said he felt like he had about nine months to work on finding a replacement.

“Keith is still here,” the mayor said. “While he plans to leave in 2020, he still provides us an interim by which we would really have a significant amount of time to try to find who we have that makes the team move forward.”

Prior to taking off at the end of the year, Holley said he a few more things he’d be working on. Items mentioned included filling the city’s vacant HR director position and also planning a staff retreat for November aimed at “building a level of trust among all the department heads.”

“Still plenty of work,” Holley said. “I’ll be around a while.”

The mayor said Monday that he has not heard anything further from the ongoing FDLE investigation into the police-shooting of Tymar Crawford last month. The agency did, however, pay a visit to city hall recently to request information about the individuals with Dream Defenders who spoke during a public forum at a recent city council meeting.

“They came down here, asked to get their names, so they could go interview them,” Robinson said, adding that the interview could delay the investigation. “I imagine that did slow down that process.”

The FDLE apparently visited with the clerk of court and got the names and addresses of the people who spoke publicly; individuals fill out a comment card with such information prior to making public comments.

In addition to making mention of witnesses to the event, the speakers also said a private video existed.

“I’m sure they’re interested in anything that someone says they have,” Robinson said.

The only video of the incident that’s been verified comes from the body cameras worn by officers on the scene. That video is currently locked down in the FDLE investigation, but the mayor has said he’ll release it to the public when the investigation concludes.

On Monday, Robinson said that while he has yet to see the video, Police Chief Tommi Lyter has seen it.

“I know that they have to download it, so I do know that Chief Lyter has seen it,” the mayor said. “I have not seen it. I mean, my whole goal was to try to be impartial as to what goes through, so I will see it when everyone else sees it.”

The mayor said Lyter has not offered him a detail synopsis of what’s revealed in the video.

On a related note, Mayor Robinson made a point to differentiate between issues pertaining to police training — which he has called for both before and after the police shooting — and issues related to a current community discussion between the city and city residents who have expressed concerns about police relations and called for a civilian oversight board.

“The police are simply the flashpoint,” the mayor said. “And that’s one of the reasons it’s been so difficult as I’ve been at this podium — they do a great job, the issue is an issue that we are still dealing with across the United States, and we continue to deal with race. And I think as we continue to work through that, this is all about building trust.”

The mayor noted the just-begun dialogue with the Dream Defenders in the wake of the shooting, and said that such a discussion centers on the subject of “trust” and “perspective.”

“We’ve got to learn to trust each other and work with each other. That’s the perhaps the biggest part, but that takes time. That takes time, it takes commitment and honest intention and working together,” Robinson spoke about the issue of trust, before diving into the matter of perspective. “It continues to be an issue of perspective. That means that all sides are valid and it just means there’s going to be a lot of discussion. I’m not saying I have the answer or it will be easy to get to the answer, but I’m absolutely committed, and the city of Pensacola is absolutely committed to finding solutions.”