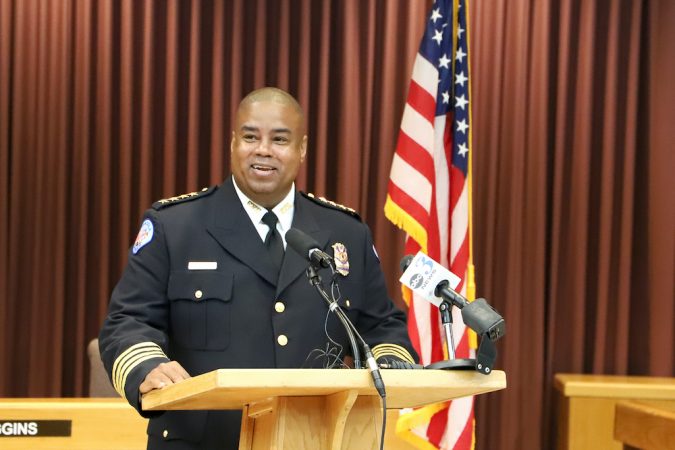 The chambers at Pensacola City Hall were packed for the swearing-in ceremony of Eric Randall, the Pensacola Police Department’s new chief. And Randall, who grew up in Pensacola and still has family in the area, seemed to appreciate the reception.

The PPD’s new chief takes the helm at a time of evolution within the department, following a 2019 incident in which a former PPD detective fatally shot an unarmed Black man during a traffic stop and ignited a multi-year conversation about community-police relations and systemic racism in law enforcement.

A proponent of community policing, which emphasizes a law enforcement agency’s relationship with its citizens, Chief Randall said during Monday’s ceremony that he felt securing the community’s trust is paramount to the department’s mission.

“It is important that the community trust us,” the chief said. “Our integrity should never be brought into question.”

Randall also stressed the importance of fostering an environment of ownership among Pensacola’s citizens — it’s their city, their police department. And he spoke about the need for police officers to serve as role models for the city’s youth — “walk the talk” — and also about the value of the “golden rule” — “We are to treat people as we want to be treated ourselves” — and also the importance of teamwork.

“Working as a team,” he said, “we will meet and overcome any challenges ahead.”

Randall also had a few words for Deputy Chief Kevin Christman. Christman served as interim chief following the exit of former chief Tommi Lyter in December and later was a contender for the chief’s position. Although he didn’t land the PPD’s top slot, Christman requested to serve as the liaison between the city and Randall as the new chief was brought aboard.

“We’re going to do great things together,” Randall said, turning to Christman. “And I really appreciate your friendship during this transition.”

Before Randall being sworn into office, the ceremony’s invocation was given by Rev. John Powell, Sr., of Truth for Youth. During his remarks, the reverend said he was hopeful about Randall leading the PPD and felt that the new chief would be capable of leading the department along its continued journey.

“These are exciting times, and this is an extraordinary great day in Pensacola,” Rev. Powell said.