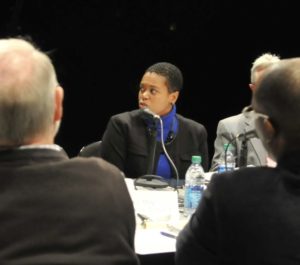 As Escambia County nears the end of its RESTORE journey, local officials have decided to “tweak” the process that will help determine how best to use about $70 million of oil spill restoration funds heading to the area.

For the past three years, the volunteer Escambia County RESTORE Act Advisory Committee has worked to help guide commissioners as they await the funds stemming from Clean Water Act penalties related to the 2010 Deepwater Horizon oil spill in the Gulf of Mexico. Working with the community, the committee now has a pool of potential projects vying for the funds. After a bit more vetting, the list of 124 projects is on track to be handed over to the commissioners soon.

But there’s a problem: the top end of the pool is apparently environmentally heavy.

During a Jan. 11 joint workshop between the advisory committee, commissioners and a hired consultant, Bentina Terry, who chairs the advisory committee, explained that the scoring system used to evaluate projects tended to favor environmental projects, sending economic development related projects farther down the list — “it will not give you what you’re looking for” — and said county commissioners would need to be explicit in their instructions going forward in order to achieve their desired results.

“Quite honestly,” Terry said, “that’s the only way you’re going to see economic development projects — ask for them.”

Currently, environmental projects, primarily water quality restoration projects, top the committee’s list. They tend to be pricey, with projects such as one aiming to restore water quality in Bayou Chico in line to eat up a third of the funds the county will see over the 17-year federal dole out.

The joint workshop was scheduled in order to discuss “goals,” after Commissioner Grover Robinson raised concerns that the local RESTORE process may have veered off the rails. The commissioner contended that the county was on the verge of dolling out dollars for projects without an overriding vision guiding their decisions.

The advisory committee was not oblivious to such concerns. Vice Chair Alan McMillan said now might be the “appropriate time to recalibrate” and asked if the committee was “still on the right track.” Terry described the process as “a little frustrating” and requested further direction.

“We don’t necessarily think that we’re going to be giving the county commission what you need to make a decision,” she said.

Commissioners agreed that they needed to offer more guidance.

“You must feel like you’re trying to get a touchdown and you’re walking on a treadmill,” said Commissioner Doug Underhill.

Bryon Griffith, with the consulting firm Dewberry, told commissioners and committee members that their current pool of projects amounted to “a lot of solutions painted against a lot of problems.” He urged them to establish “crosshairs” in order to “exercise that next level of judgement.”

“So, the exercise in front of you is, with a limited number of bullets, where do you shoot?” Griffith reiterated nearly four hours into the workshop.

It was fairly obvious where commissioners wanted to shoot.

“I’m going to have a heavy lean toward things that have an economic development component,” said Commissioner Steven Barry.

“Economic development and job development have got to be number one,” said Commissioner Wilson Robertson.

Commissioners also noted that the dollar amount the county expected to see from RESTORE funds had significantly decreased over the three year process. While officials originally envisioned a $200 million windfall coming to the county level, they now face an annual amount of less than $5 million.

“It’s going to be tough to do the long-range impact kind of projects we thought we were going to do,” said Robertson.

Advisory committee member Greg Beck chalked RESTORE’s annual contribution up to “a rounding error in y’all’s budget.” And committee member Tammy Bohannon noted that some ambitious environmental projects might not be financially sustainable, conceding that the county may need to look less at “game changer” projects and more at the “boutique” variety.

But Bohannon also cautioned against walking away from the committee’s three-year process — and the relationship and trust it has cultivated with the community — and going “straight to economic development.”

“I’m sure they’re freaking out — ‘Oh, great, we’ve spent three years on this process and now they’re about to do a 180 and go a different direction,’” Bohannon said.

Christian Wagley, designated as the committee’s environmental representative, also expressed concerns. He wondered if a redirection might conflict with the public input the county has received throughout the process.

“When we talk about goals, I think it’s important to remember, goals were very much set throughout this process and they were set by the community,” Wagley said.

On Jan. 19, the RESTORE advisory committee will meet to hear verbal pitches from the remaining projects in the top half of the pool, but members will be listening with a different frame of mind. Commissioners have instructed them to separate projects into categories — environmental, economic development and tourism — and let it be known which pools they’ll likely wade deeper into when making their final selections.

Commissioner Underhill, who plans to outline his vision for local RESTORE funds in a position paper, summed up the perspective being handed down from on high fairly neatly. He described Escambia County as “a beautiful place with a deferred maintenance issue,” explaining that in addition to having an array of environmental woes, the county has also neglected to tend to economic issues such as workforce development.

“There’s nothing worse for the environment than poverty,” Underhill said.