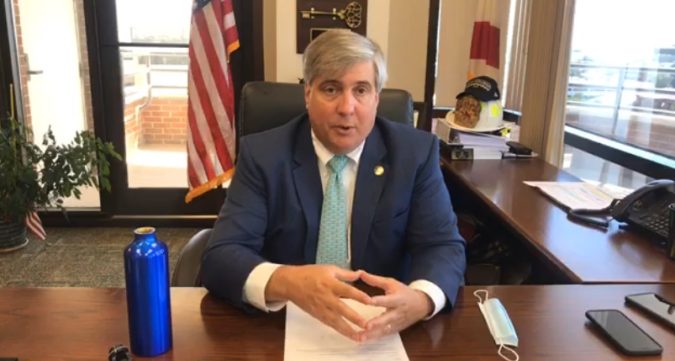 “I know many of you out there are asking, ‘What’s going on? Where are we going in the future?’ I would say, I wouldn’t worry too much about where we are in the longterm, I would go day-by-day going through things as we progress,” Robinson said.

The mayor used the online event to update the city’s reopening plan. Although there were plans to begin reopening the businesses within the city of Pensacola on Friday, that has how been delayed until Monday to correspond with the reopen rollout at the state level.

“Right, wrong or indifferent the governor has made the decision to use Monday as his date,” Robinson said, noting that city plans were always contingent on state-level plans.

One exception, the mayor said, would be certain city recreation facilities that were closed to encourage social distancing and crowd limitations. Those facilities include tennis courts, basketball courts and playgrounds.

Robinson said that the city’s ability to keep such facilities open would depend on people limiting themselves to groups of 10 or less.

“We will be monitoring,” he said.

Come Monday, the city as well as the state progress fully into phase one of reopening, during which certain measures instituted to curb the spread of COVID-19 will be eased. Currently closed businesses that are reopening include retail and restaurant establishments, though at a reduced capacity to ensure social distancing measures can be observed.

“We will be out looking at things and asking for compliance,” Mayor Robinson said.

Robinson also said that he understands other businesses — such as nail salons, dentists and tattoo parlors — need to know when they can expect to return to business. While he has forwarded questions to the state level, the mayor did not have definitive answers on this front.

“We will continue to advocate for you and your industry, but at this point we’re going to follow the governor’s lead,” he said.

Mayor Robinson said that the progression of the city’s reopening process will hinge on the data coming back from coronavirus tests in the region. If the the positive rate holds at its current five percent, reopening will progress gradually, with safety measures such as the use of masks in public encouraged. But if the rate increases, or if hospital capacity — which has yet to reach 25 percent — appear at risk, then reopening could be paused or reversed.

In addition to questions about the city’s reopening specifics — asked by participants in the Facebook Live event — the mayor was also asked about various items outside the city’s purview, such as the reopening of local beaches, the paying of property taxes, how to access the DMV, and what was the matter with the state unemployment system. On these, he redirected to the appropriate agencies.

In addition to fielding questions and clarifying the city’s plans, Mayor Robinson also took the opportunity Thursday to make a call for unity, noting the divide between those pushing for a quick return to normalcy and those urging caution. The mayor said he thought both community health and the economy could be fostered in tandem if done responsibly.

“I cannot say this enough, we’re all in this together,” Robinson said. “I’m very concerned about where we’ve seen a rift, both in our own community, as well as the country, the state, the nation. Certainly, the national issues have been divisive for a long time, but the way this has become locally, that concerns me. We need to be working together. The communities that find a way to bridge this gap, and have leadership that bridges this gap will be communities that come out of this stronger. They’ll be stronger both with their health and they’ll be stronger with their economy.”