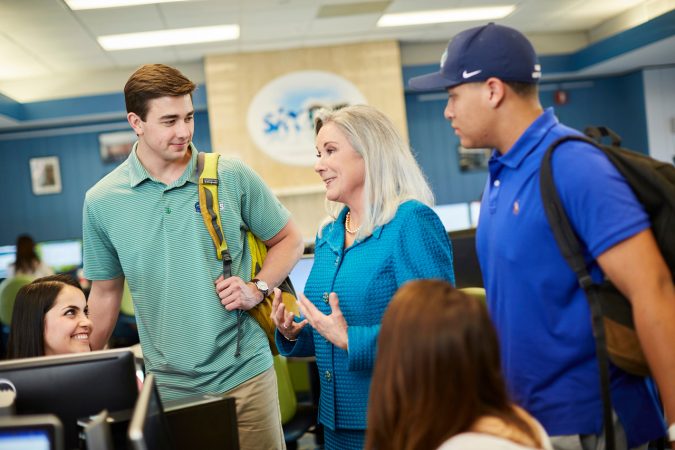 President Martha D. Saunders’ term as University of West Florida president has been extended through the end of the 2022 calendar year. The Board of Governors unanimously approved the one-year extension on Nov. 4 after the UWF Board of Trustees unanimously voted on Saunders’ contract renewal in September.

“I am honored to serve as president of UWF for another year and appreciate the confidence that the UWF Board of Trustees has placed in me,” said Saunders. “We are building on good momentum to meet the needs of our students, our region and our state.”

During Saunders’ presidency, the University has received national recognition and numerous awards. UWF led the state in percentage of bachelor’s graduates employed in this year’s Florida Board of Governors performance metrics. The University increased the percentage of employed and/or furthering education graduates by nearly six percentage points from last year. UWF also excelled in Metric 2, median wages of bachelor’s graduates employed full-time one year after graduation, with a median salary of $45,200, an increase of more than $4,000 from last year’s metrics. The median salary of UWF graduates is higher than almost all metric-participating SUS institutions.

This past year, the University had record enrollment and recognition through rankings, grants and awards. The University has received the Higher Education Excellence in Diversity Award from INSIGHT into Diversity magazine four out of the last five years and was named a “Great College to Work For” in 2019, 2020 and 2021.

In a letter to the Board of Governors, UWF BOT Chair Suzanne Lewis highlighted the institution’s ascension as a national leader in cybersecurity under Saunders’ leadership, while effectively navigating the University through the pandemic and executing a majority of her goals set forth for the year. Lewis cited UWF’s ability to adapt and innovate under Saunders’ leadership.

“President Saunders is a proven and driven leader throughout the campuses of UWF and the Northwest Florida Region,” Lewis said. “Her drive to develop and incorporate high impact practices and programs throughout the University and region continues to bring valuable economic and academic rewards to our students, faculty, staff and community as a whole.”