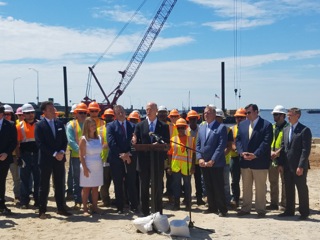 Governor Rick Scott held a kick-off event at the base of the old Pensacola Bay Bridge Monday morning for the four-year, 3.7 mile bridge replacement project.

“As you can expect we have a lot of people interested in making sure this bridge was done right,” Gov. Scott said. “The new six-lane bridge connecting Pensacola to Gulf Breeze is great news for our families, visitors, our tourists, military members and our business travelers.”

Scott spoke about the significance the bridge project has for Pensacola. It is providing over 4,000 more jobs. Other officials emphasized that the bridge will not be tolled, which is atypical for bridges in Florida.

“When we first heard about the need to replace the bridge, it was widely assumed it was going to be tolled,” State Representative Clay Ingram said. “Thanks to all of you we realized that a toll would become a hugely regressive tax, and it would hurt a lot of people here.”

Pensacola Mayor Ashton Hayward echoed the bridge’s importance. He stressed the significance of infrastructure, beautification and getting the project done right while working together as a city.

“Florida is my home, and I’ve tried to spend every day giving back to this great state that have given so much to my family,” Patronis said. “I want to help continue this legacy of job growth and economic prosperity in our state.”

The bridge should be completed in the summer 2020, while the first eastbound bridge will be finished January 2019. This 1,408-day project should help the economy and bring jobs to the coast, according to the University of West Florida’s Haas Center for Business Research and Economic Development.