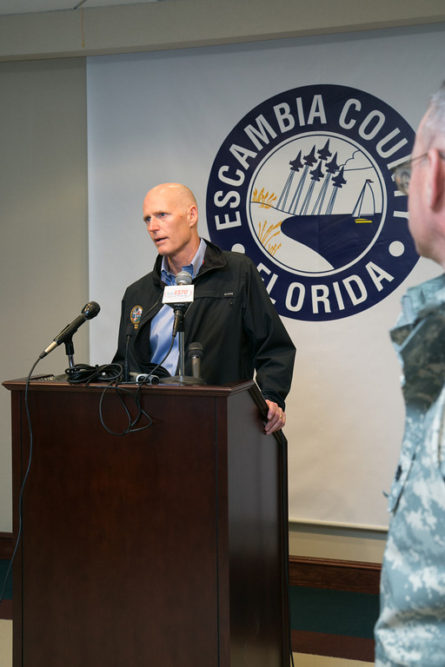 Calling the massacre at an Orlando nightclub “an attack on our state and entire nation,” Gov. Rick Scott early Monday asked President Barack Obama for a federal emergency declaration in Florida.

Scott’s requested the declaration under a federal law known as the Robert T. Stafford Disaster Relief and Emergency Assistance Act, which can help provide federal aid to states after disasters.

“During a June 12, 2016 press conference, you accurately characterized the terrorist attack as a ‘horrific massacre,’ ” Scott wrote in the request to Obama. “I urge you to declare an emergency under the Stafford Act so that ‘the full resources of the federal government’ can be made for the individuals, families and communities impacted by this ‘horrific massacre.’ ”

Scott’s request came a little more than 24 hours after lone gunman Omar Mateen, 29, went to the Pulse gay nightclub in Orlando and committed the worst mass shooting in U.S. history. Fifty people died and 53 people were wounded in the incident, which Obama, Scott and other authorities said was an act of terrorism.

Mateen, who died in a shootout with police, pledged allegiance to the Islamic State terrorism group during the incident. Authorities said during a news conference Monday morning that 48 of 49 of the victims had been identified and that the process of notifying families was ongoing. Mateen’s death brought the total to 50.

Scott on Sunday declared a state of emergency in Orange County. In his request Monday to Obama, Scott issued an accompanying statement that said he had been “in contact with some of the victims’ families to let them know we are grieving with them and will be there for them every step of the way.”

“Our state is mourning, but the Orlando community is strong,” Scott said in the statement. “We are all coming together, and we will get through this together. I ask every American to continue to pray for our state and nation and all those affected by this terror attack.”

During the news conference Monday morning, Orlando police provided more details about the attack, and federal, state and local officials said they were continuing the investigation and trying to help victims and families.

On Sunday, Obama made a nationally televised address about the attack, which he described as an “especially heartbreaking day for all of our friends — our fellow Americans — who are lesbian, gay, bisexual or transgender.”

“The shooter targeted a nightclub where people came together to be with friends, to dance and to sing, and to live,” Obama said. “The place where they were attacked is more than a nightclub — it is a place of solidarity and empowerment where people have come together to raise awareness, to speak their minds and to advocate for their civil rights.”