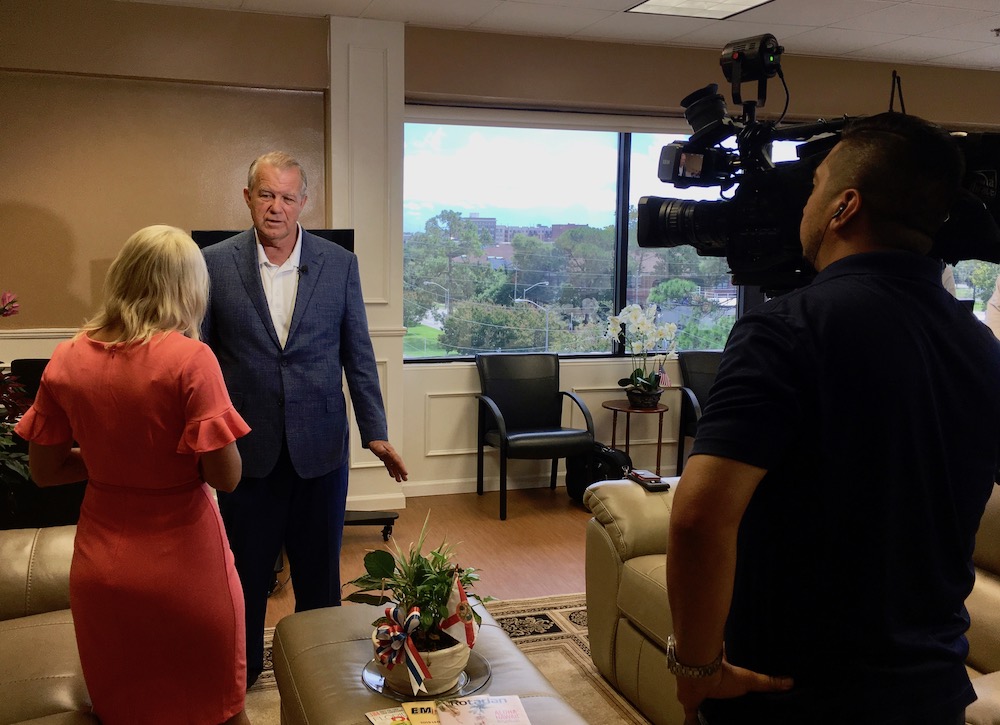 State Senator Doug Broxson (R-Gulf Breeze), accompanied by a spokesman from the Florida Department of Transportation, invited local media to his downtown Pensacola office Thursday to discuss the continued delay of the completion of the new bridge spanning Pensacola Bay.

“Every time there’s a delay with this, people’s imaginations go crazy,” Broxson said.

It’s been about a month since the new bridge was suppose to open to drivers. The state has delayed the opening twice, but said offered little information on the subject. Broxson said Thursday’s meeting with the press was “our chance to bring it out of the dark.”

Essentially, the senator said, the bridge is structurally complete, but work is still being done on “cosmetic” aspects of the bridge, as well as elements such as lighting.

“I think this is what it looks like when you have a $500 million project,” Broxson said, contending such delays were to be expected with such a large project.

Ian Satter, an FDOT spokesman, reiterated the senator’s points, explaining that the company handling the bridge’s construction, Skanska, is working to round out the finishing touches.

Satter — who said that FDOT would not open the bridge until it was fully complete —also noted that some of the delay is due to Skanska not being able to proceed with planned approaches, such as working at night with one lane closed to traffic after the structure is open.

“I think there were some ideas,” he said “that did not follow our specifications.”

Sen. Broxson said that going forward he expected the state to be more open about the current progress of the project.

“I’ve encouraged DOT to be more communicative with the public,” he said. “You’ll know what they know.”

While FDOT is not issuing any expectant completion date at this point, Broxson said he thought it would be “very so.” But then he hedged his bet a little, explaining that he doubted the state wanted to debut the bridge prior to the busy upcoming holiday weekend.

“I’m guess it’s going to be right after Labor Day,” Broxson said. “They don’t want to be drinking out of a firehose on the first couple of days.”

The new bay bridge — the largest infrastructure project in Northwest Florida history — was slated for an optimistic completion in February. Skanska forfeited a $15 million bonus when they missed that date.

The new bridge replaces the previous bridge built in 1960, which has been declared structurally deficient. Following the new bridge’s completion, the old structure will be demolished.

Whereas the current bridge has only two lanes traveling each direction, the new bridge will consist of two parallel structures — eastbound and westbound — with three lanes each, as well as a 10-foot path for pedestrians and cyclists.