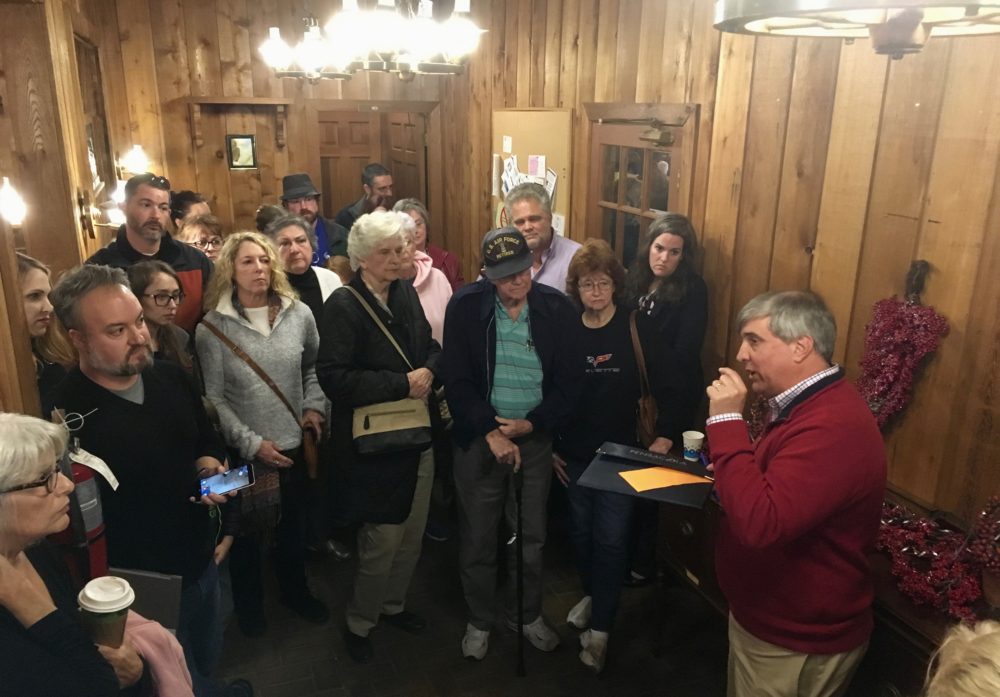 Billed as a public input session for Pensacola Mayor Grover Robinson’s transition team, a Tuesday night city meeting quickly spiraled off in another direction, with many attendees wanting to discuss the soccer complex proposed for Langley Avenue.

“I am really impressed by this turnout. This is awesome,” said D.C. Reeves, who is serving as staff for the transition team. “Standing room only. This is what you want.”

The meeting hall of Asbury Place was packed. Of course, in five minutes half the crowd would be out in the vestibule shout-talking with Mayor Robinson about the soccer complex. But for the moment, everyone seemed content to marvel at the extraordinarily long map of 9th Avenue stretching across multiple tables and detailing potential improvement projects.

“That is 9th Avenue, from Bayfront Parkway all the way to Olive Road,” explained Pensacola City Councilwomen Sherri Myers, motioning toward the tables. “This will give people an idea of how long that street is and how many neighborhoods are effected by it.”

Soon enough, members of the mayoral transition team split off to individual stations where they engaged in discussions with members of the public interested in their respective purviews: environment, economic development, crime and safety, etc.

And Robinson informed the crowd that although the soccer complex wouldn’t be relevant to the transition team meeting, anyone who wanted to talk about that subject could meet him out front in the building’s entryway.

“I’m more than happy to discuss that item with you,” the mayor said.

With the vestibule swollen with dozens of people, Robinson attempted to explain the city’s position and intention: officials are eyeing a potential swap with the YMCA that would see the city get some property adjoining Hitzman Park off of Langley to construct the soccer complex, and allow the Y to operate out of the Vickery Center at Roger Scott Athletic Complex.

“The reason we are looking at this,” the mayor said, “there is a real potential for us to do many things for the city.”

The city has been searching for the available space to put a dedicated soccer complex because its youth league has grown exponentially in recent years, outgrowing the fields it currently shares with football and baseball at Roger Scott. In November, city council approved a request to engage in talks with the YMCA about the possibility of some sort of deal that would involve both a geography swap and a services-shift.

Some residents of the Scenic Heights neighborhood near Hitzman Park have begun voicing concerns about the impact a soccer complex would have on the area. Chief concerns are increased traffic on Langley Avenue and the possibility of changing existing features of the park.

Mayor Robinson told the group of citizens that the park was no stranger to league sports.

The mayor also decried what he said was misinformation on the city’s plans, assuring people that the city did not intend to drastically change the park.

“The disc golf stays,” he said. The wooded area stays.”

The crowded, claustrophobic environment of the entryway seemed to foster particularly emotional, toe-to-toe debate on the soccer complex. As Mayor Robinson tried to field a flurry of comments from the crowd, voices grew louder and more impassioned. Eventually, the chamber echoed with curt shouting.

“Stop yelling at us!” somebody shouted at the mayor.

“I’m not yelling at anybody!” Robinson responded.

An older woman stepped forward and motioned for calm: “Everybody’s yelling at him, he had to yell back.”

The room paused for a deep breath.

McKnight wanted to know the appropriate venue in which to voice concerns about the city’s plans.

“Would it be more beneficial for us to go the city council meeting?” she said.

Robinson told the group that they could approach council Thursday night, but they would be better off attending a neighborhood meeting schedule for Scenic Heights Elementary School at the same time as the council meeting, where Parks and Recreation Director Brian Cooper will be holding a forum dedicated to the issue of the soccer complex.

Sharon Dickinson, a Scenic Heights resident who has been collecting petition signatures against locating the soccer complex off Langley, said she felt people needed to go straight to council in an attempt to reverse course.

“If there is to be any change in this plan,” she told the group, “it will have to come from the city council.”

Note: Jeremy Morrison has more the Scenic Heights Soccer Complex debate in our Jan. 17 issue, which will be live on inweekly.net at 4 p.m. today and in our stands tomorrow.