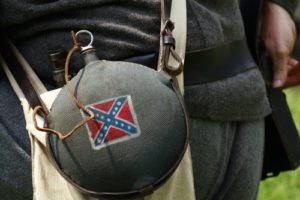 After a heated public hearing, the Walton County Commission on Tuesday voted to postpone for two weeks a vote on whether to take down the Confederate flag at the county courthouse in DeFuniak Springs.

The motion to postpone by Commissioner Sara Comander prompted a storm of protest and applause in a packed meeting room at an annex of the courthouse in Santa Rosa Beach. But the motion was quickly seconded and approved.

Dozens of attendees wore buttons with the message “Take Down the Flag.” Others wore the Confederate battle flag as T-shirts or logos — one speaker even wore it as a necktie.

“If you vote to remove the flag, the next step will be the banishment of the monument,” Phillip White warned the commissioners. “Many people in this country and this state ask, when and where will it end.”

Across the county, in DeFuniak Springs, the Confederate battle flag flies over a monument to the Confederate war dead. Local attorney Daniel Uhlfelder — who first tried to get the commission to take down the flag in 2002 and lost 5-0 — said the monument wasn’t the problem.

“We have no issues with it staying where it is,” Uhlfelder said. However, he added, Walton County never had a Confederate flag at the courthouse until 1964 — when commissioners voted for it shortly before President Lyndon Johnson signed the Civil Rights Act into law. “It was a political statement against integration, against human rights.”

“When you see this flag, it brings back memories of a time when we had separate waiting rooms at the bus station, black and white drinking fountains at the courthouse,” said Raymond Jackson, president of Northwest Florida branch of the NAACP. “The county commission put this flag up (in 1964) to let us know where they stood on our civil rights.”

The debate echoes others taking place in Southern states since last month, when white supremacist Dylann Roof gunned down nine people in a historically black church in Charleston, S.C.

But speakers Tuesday said they’d had enough of the lowered flags that followed the massacre. One, Danny Katro of Freeport, referred to Roof as a “snotty-nosed punk” and noted that while photos had surfaced online of Roof wearing a Gold’s Gym T-shirt as well as a Confederate flag, “I don’t see anybody boycotting Gold’s Gym.”

Other opponents of removing the flag pointed to Marion County, where on Sunday an estimated 2,000 people rode in the Florida Southern Pride Ride, wearing T-shirts marked “Heritage, Not Hate” and waving Rebel flags. The demonstration in Ocala followed a vote by the Marion County Commission to restore the Confederate flag — which had been removed after the Charleston killings — to the McPherson Governmental Complex.

Whatever they decide, Walton County commissioners are certain to face angry voters. Reached by telephone before the meeting, state Sen. Don Gaetz, a Niceville Republican who represents the area, said commissioners should “look into their hearts.” He also pointed out that the flag currently flying at the Walton County Courthouse is not the “Stars and Bars” of the Confederate Army, but a symbol of the Jim Crow era.

“As a public official, I certainly don’t want a symbol of hate flying over public buildings in Florida,” Gaetz said. “I know it’s not meant that way by many people. I know many people revere their Southern ancestors and revere their sacrifice. … But I agree with Governor (Jeb) Bush that it’s time for this relic of history to be in a history museum.”

Gaetz and Uhlfelder noted that as governor, Bush had removed the Confederate flag from the state Capitol to a museum.

“If we do not remove the Confederate flag, we will be one of the last courthouses in the entire country to fly it,” Uhlfelder said. “Do we want to be the last flag standing?”

Now, with the decision postponed until July 28, some citizens worry about its potential to divide their community.

“Of course, I’m hoping that the landmark stays as is,” said Richard Roberts, who wore the Confederate flag as a logo on his shirt. “If not, I’m sure that as a community, we’ll move forward. I just hope that everyone can deal with whatever the outcome is.”