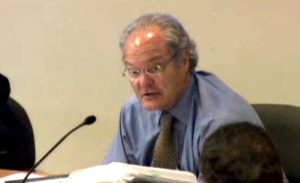 Toward the tail end of Monday’s two-plus hours of discussion regarding the leasing process for properties at the Community Maritime Park, City Attorney Jim Messer boiled it down to one sentence.

“This is just a simple declarative statement: the CMPA negotiates the lease,” he told the Pensacola City Council.

On the heels of the YMCA-parcel 8 meltdown, council requested that the attorney clarify the process by which properties at the park would be dealt with in the future. During this week’s Committee of the Whole meeting, Messer offered up a memorandum that, in short, stated that a prospective tenant could approach either the city council, the mayor or the Community Maritime Park Associates Board of Trustees, before negotiating a lease with the CMPA board that would then need council’s approval.

“The important point that I want you to carry away is,” Messer explained, “although the CMPA has the duty to negotiate the lease, if, in fact, this council expresses a preference for a certain tenant, a certain parcel, then the CMPA is bound to honor that and not negotiate that particular aspect anew.”

Recently, the CMPA board flinched when the YMCA approached them with a proposed lease for the park’s waterfront parcel 8. The Y’s lease had been hatched via private talks with Mayor Ashton Hayward and CMPA Chairman Collier Merrill, nurtured through multiple drafts with Messer and weathered hours of discussion in city council meetings before ever being brought to the park board. When the lease did make it to the board, the CMPA decided to direct the Y to other parcels and the Y walked away.

“The process is not flawed, it’s the people that operate the process that are flawed,” Messer told council, explaining that when the structure was put in place it was assumed that all parties would be working in a spirit of “harmony and cooperation.”

The attorney offered to bring the city’s special counsel up from Miami for this week’s regular meeting in an effort to better explain the particulars and “put to rest the sort of nagging uncertainties.”

Councilman Andy Terhaar told his fellow members that he had little appetite for bringing in another attorney.

“It just seems like we’re kind of willy-nilly hiring attorneys to back stuff up and I just don’t know if I want someone driving or flying—or whatever he’s doing—up here just to come sit and us pay him a bunch of money to basically say ‘I agree with you,’” Terhaar said.

Fred Gunther, the CMPA board member who made the motion that ultimately blew the Y deal, described Messer’s memo as “kind of unusual” and told the city council that it should be careful when dealing with a process which was designed to accommodate the New Market Tax Credits.

“By stating that ‘you’re just a shell entity and you do what your told,’ you’re dangerously close to violating the terms of the tax credits,” Gunther said.

In addition to assessing long-term procedural questions, the city council also discussed the more immediate concern of talking the YMCA back to the negotiating table. Council had previously directed President P.C. Wu to approach the organization, but in light of Messer’s memo and council’s discussion, the president said he was “puzzled on how to proceed.” He wondered which body to direct the YMCA toward for negotiations.

“I think it’s their choice,” said Councilman Brian Spencer. “I know I would give them my hint as to where they should return.”

Spencer explained that he wouldn’t want to see the YMCA return to the CMPA, but rather the more-friendly territory of the city council. This talk eventually led to Messer’s “simple declarative statement.”

Council ultimately decided to have Wu approach the Y and ascertain if the organization was even interested in pursuing a site at the Community Maritime Park.

Also during Monday’s COW, the council discussed possible changes to the city’s policy dealing with the disposition of city-owned property.

“I want to reiterate, this was brought before council at council’s request,” City Administrator Bill Reynolds began. “Initially, we had it put on as an action item, but I could already tell from the rumblings that, you know, the black helicopter crowd was stirring things up a bit and frankly this needs to be a collective effort between council and the mayor’s office.”

The administrator had outlined some proposed changes—“our initial stab at it”—to the current city policy. Whereas the city council is currently plugged into the process throughout, the changes would allow the mayor to engage potential buyers—selecting the property and the method of disposal (RFP, bid, or direct negotiations)—and bring a complete deal to council for its final approval.

Several council members expressed concern over the proposed tweaking. They suggested taking another look at reworking the process, and stressed cooperation over streamlining.

“I think our city needs to be rebuilt by a leader vs. a committee,” Spencer said.

Council Executive Dr. Lila Cox told members that she felt there was more work to be done. She said the city should look to other municipalities with similar policies.

“I think that there are models out there that we could develop a policy after,” Cox said.

Also during the property-disposition conversation, Councilman Gerald Wingate inquired about the city’s parks. He said he had been contacted by a citizen concerned the city might be selling off parks and wondered if that were going to be the case.

“Well, I think it’s to this body to decide,” Reynolds explained. “But I will say, generally, we have 92 parks of varying degrees of value, and to have a blanket exemption—I’m not a fan of blanket exemptions—and just on a personal level I think you run the risk of having some opportunities to see land that may be of very little value to the city in reality, but it’s called a ‘park,’ if it’s never used or, you know, or provides no value to the community just because it’s called a park, doesn’t necessitate that it should be taken off the market.”

The city council meets today at 5:30 p.m. for its regular meeting at Pensacola City Hall.

[this article has been corrected; Gerald Wingate was misidentified as ‘Charles’ and Dr. Lila Cox was listed as ‘Lyla.’]