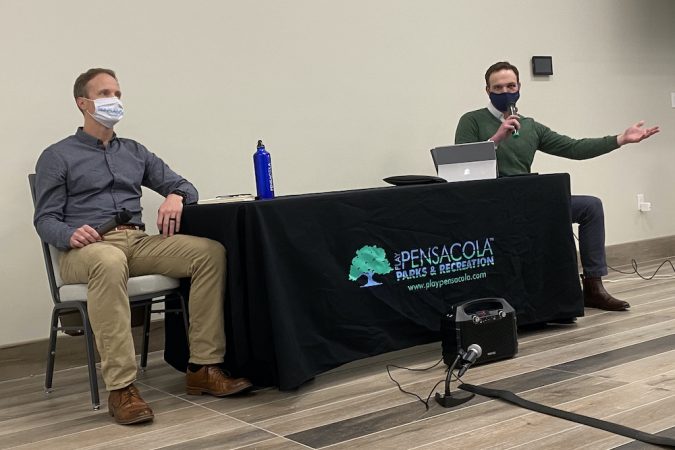 “If you were here an hour ago, you would have seen one of the most incredible sunsets you could imagine,” Rep. Andrade told the socially distanced attendees taking in the facility.

The city is holding a ribbon-cutting for the Bayview on Friday, but the community center’s scope will remain limited due to coronavirus safety measures currently in place.

“It’s an incredible facility,” noted Councilman Moore. “I can’t wait to turn it loose to the public.”

Thursday’s town hall focused primarily on providing updates regarding the repair of the new Pensacola Bay bridge — the Gen. Daniel ‘Chappie’ James Bridge — which was knocked out by runaway barges during Hurricane Sally last fall. Since that time, commuters traversing between Pensacola and Gulf Breeze or Pensacola Beach have had to circumnavigate the offline bridge via a lengthy detour.

Rep. Andrade told attendees that he was prepared to address “the questions coming in, rumors flying around,” and stressed that the bridge would be ready to go by the March deadline projected by the Florida Department of Transportation and its contractor Skanska.

“I can tell you that there is absolutely no one between DOT and Skanska that have told me otherwise,” Andrade said.

The rumors referred to by the representative pertained primarily to the bridgework falling behind schedule. Specifically — as relayed by Pensacola Mayor Grover Robinson recently — FDOT has informed local officials that getting the bridge’s pylons in place was taking longer than expected.

Andrade said that the various phases of the bridge repairs were coinciding — “these things aren’t done linearly” — and that a lag in placing the pylons did not necessarily mean a delay overall.

“It’s gonna get open by the end of March,” the representative assured.

During the question-and-answer session of the town hall, Rep. Andrade fielded a query from an attorney who said her firm represented business owners impacted by the offline bridge. She asked if the state could create a special fund from which losses could be offset while it is determined in the courts if Skanska — responsible for the barges left unsecured — is on the hook for the costs.

Andrade said that the state would not be setting up such a fund, in part because Skanska — unlike BP following the 2010 oil spill in the Gulf of Mexico — isn’t into “playing ball.”

“No matter how much I would like it, there will not be a pot of money set aside for damages,” Andrade told the attorney.

Straying from the topic of the bay bridge, local walkability and biking advocate Christian Wagley asked Rep. Andrade if there was a chance that FDOT might reorient its focus when appropriate to emphasize the needs of pedestrians over vehicles. Specifically, he pointed to local state roadways — like Cervantes Street or 9th Avenue — that acted to split up the city’s landscape and neighborhoods, creating a difficult path for pedestrians and bicyclists.

Wagley continued, saying he understood that traditionally FDOT did not approach projects from this vantage point — “Inside the organization, it’s still a challenge” — but suggested that perhaps the state legislator could nudge the agency: “The ability you have to influence the budget, that’d be a great thing to see.”

Andrade replied that FDOT is evolving, pointing to a study the department is currently engaged in to determine if a hiking trail would be suitable along Scenic Highway’s bluffs.

“The city came to me, and I brought it to DOT,” the representative said, explaining his role in shepherding the potential trail project onto the state’s radar.

“If you’ve been calling it the ‘tic tac toe’ or the ‘pound’ project, you’ve been doing it wrong,” Moore joke, referencing the shape-based moniker of the project.

The Hashtag project involves a confluence of downtown streets and aims to improve connectivity and walkability in the city’s urban core.