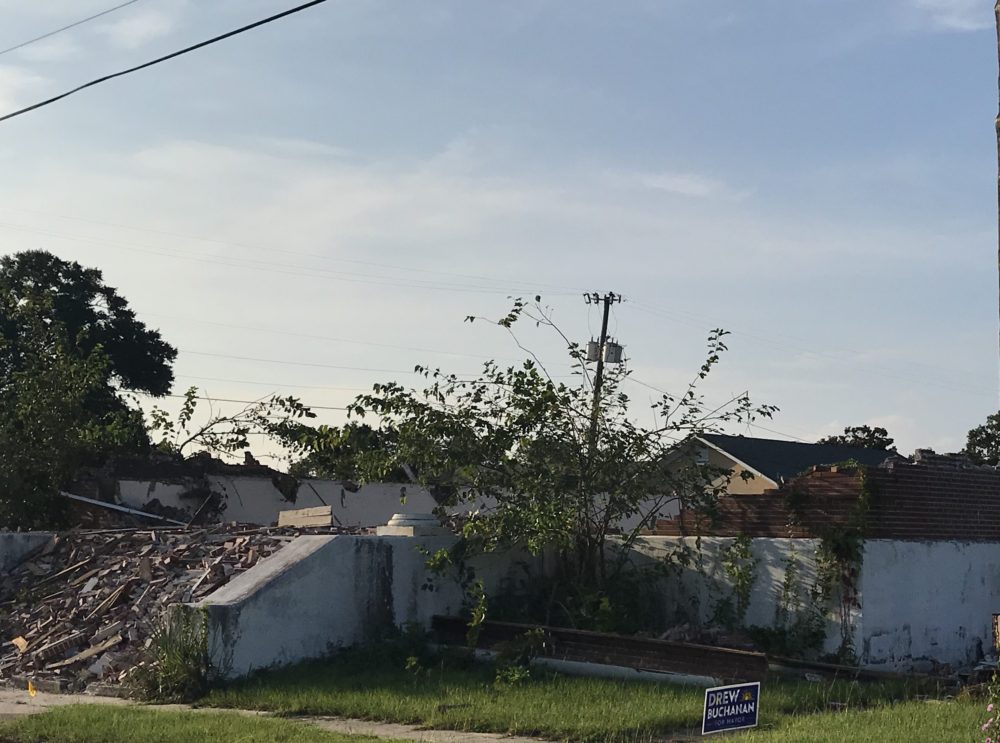 Hurricane Ivan tore a gapping hole in the roof and damaged much of the interior in September 2004. The small congregation didn’t have wind insurance. The church wasn’t repaired and the congregation attended services at other churches like Myrtle Grove Baptist Church, East Hill Baptist Church and Hillcrest Baptist Church, according the obituaries I found.

In January 2014, Mata Enterprises, LLC bought the tax lien on the property.

In April 2017, Circuit Judge Gary Bergosh ruled title to the property should be given to Mata Enterprise and any claims on the property by the Pensacola Bay Baptist Association, Florida Baptist Convention, Southern Baptist Convention and “all unknown, unidentifiable members, trustees, and deacons of the Whitfield Memorial Baptist Church, an extinct” were canceled. See Whitfield judgment.

After sitting in disrepair for nearly 14 years, the building has been demolished.

Mayoral candidate Drew Buchanan believes the building could have been restored and redeveloped had the city had in place “common-sense historic preservation ordinances and incentives.” He wrote the council the following email:

Today, I watched one of the westside’s most historic churches, Whitfield Baptist, torn down on West Jackson Street in a matter of a few hours. A century of history. Gone.

In less time than it takes to get a permit for a new fence for your home, a demolition permit was applied for and approved to demolish this historic neighborhood landmark.

This church is — was — special to my family and I. It’s where my great grandparents worshipped, where they were baptized, and where their funeral services were held before they were laid to rest at St. John’s Cemetary next door on La Rua Street. I can’t imagine how many other families on the westside have similar attachments to this neighborhood treasure as my family does.

You have the ability, in partnership with the mayor, to pass common-sense historic preservation ordinances and incentives that can help promote the restoration and redevelopment of structures such as Whitfield Baptist — just as is done in great American cities like New Orleans, Charleston, Savannah, and Birmingham. Time and time again, we’ve had the opportunity to protect our most neglected and historic neighborhoods yet we’ve continually bowed down to special interests and the political challenges placed before us. My question to you is, where is the political will?

We have the tools at our disposal to create common-sense regulations that provide for a thorough review process for the demolition of historic structures, just as is done in many other cities that are prideful of their rich culture and history. Today I spoke with Ms. Mazie Harris, a 60-year resident of the neighborhood, who told me she treasured this building since she was a child and it was only when she went for her daily walk this morning did she find out about its destruction. Irreversible decisions like this should not be made in less time than it takes to get a gas meter permit or approval to build a picket fence, but that is the reality in our city today.

We have the tools to create historic overlay districts outside our downtown — just as in New Orleans and Charleston — that protect our historic neighborhoods and provide common sense development standards for new construction. Current proposals like the CRA Urban Design Standards Overlay that was scheduled, and then subsequently pulled, for considering this month accomplish much of these goals for new development.

We have the tools to create local incentives for the restoration of historic structures into residences, office space, restaurants, retail, and other uses. Just as we have given tax incentives for new developments downtown, we can implement tax credits for the restoration of historic residences and commercial buildings in neighborhoods like the Tanyard, the Eastside, and Brownsville; we can reenergize and appropriately fund our facade grant program to incentivize restoration of deteriorated storefronts and homes; and we can reward developers and citizens who take a risk to redevelop historic buildings with density bonuses, expedited permitting, matching grant funding, and property tax abatements.

Look, we have the tools necessary to accomplish all of this — it just takes the political will to get it done. The longer we wait, the more historic structures we’ll lose and I just don’t know how much patience citizens have left.

Yes, this is an election year. But that shouldn’t stop you from taking action now to put in place these common-sense solutions. I can’t imagine what my great grandmother would think of what happened to her beloved church today. Let’s not make it be for nothing.

For me, the best case for restoration of historic structures was Hallmark Elementary School, which was still a viable building. It was completely demolished for a housing project that now appears to be stalled. 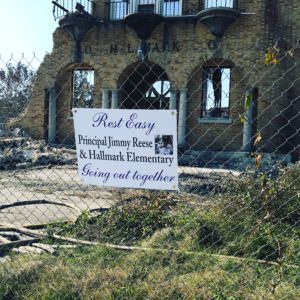