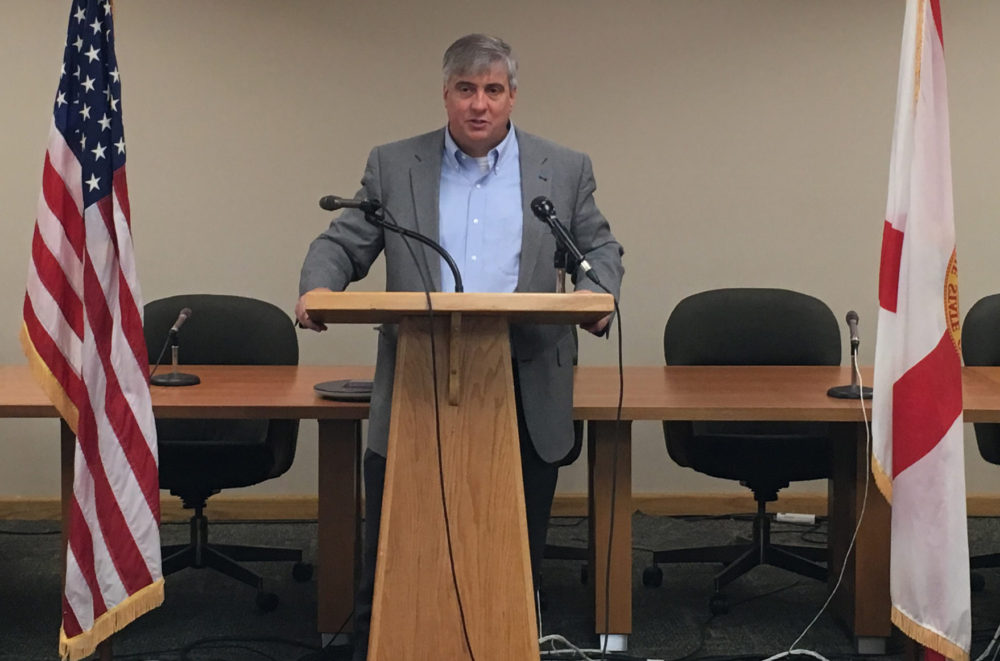 —There was no agenda, no slant, no angle, no boundaries. No spiffy see-through lectern sporting the city’s swave logo. Just Mayor Grover Robinson, a couple of microphones and a roomful of reporters with questions.

In stark contract to what had evolved into the controlled-message, bunker-mentality environment of his predecessor, the newly elected mayor held his first press conference — the first of what will be a weekly affair — with local media Monday.

“We’ve had a good first week,” Robinson opened the press conference, later adding that “we’ve sort of been drinking from a fire hydrant at this point.”

[pullquote]We’ve sort of been drinking from a fire hydrant at this point. -Mayor Grover Robinson[/pullquote]

The new mayor began by addressing a couple of items on the city’s radar. Chief among them were walkability issues along Tarragona Street.

“We are really seeing the historic area beginning to connect with downtown,” Robinson said, referring to an uptick in the flow of pedestrians crossing Tarragona, which separates the downtown core from the city’s historic district.

“We’ve always had Government Street, which has been a good pedestrian crossing, but now with Southtowne and the Y, we are really seeing the need for Tarragona and Intendencia to have a four-way stop,” he said, indicating that the intersection should be getting stop signs sometime this week.

For now, the city is focusing on the intersection of Tarragona and Intendencia, but as the area continues to attract more foot traffic additional intersections, such as Tarragona and Romana Street, could be assessed. Foot traffic, as opposed to vehicular traffic, is the catalyst for carving out additional crossing points and four-way stops.

“It didn’t so much warrant it from a traffic standpoint,” Robinson said, “but the pedestrian traffic is significant enough that it’s time for us to do something there to keep them safe.”

[pullquote]“We are roughly about $40 million short at this particular time,” -Robinson on Triumph grant requirements[/pullquote]

The first issue the press dug into concerned the securing of funds needed for the ST Engineering expansion at the Pensacola International Airport. The city has been approved for $56 million of funding from Triumph Gulf Coast, but it is contingent on Pensacola coming up with the rest of the funding, more than $200 million. Some of that remaining funding has been secured, but the previous administration was unsuccessful in locking down all of it before Robinson took office.

“We are roughly about $40 million short at this particular time,” the mayor said.

Pensacola is currently working with the state, economic development organizations and local legislators to try to wrangle the needed funds by the Dec. 31 deadline. Those efforts have been complicated by the fact that the state government is in transition, with a new secretary of transportation — who will hold the keys to another $25 million from the Florida Department of Transportation — not yet selected.

Also, left over from the administration of former Mayor Ashton Hayward, was the matter of a planned fish hatchery. The hatchery, funded by the Florida Department of Environmental Protection, was slated for Bruce Beach, but was scrapped by the state due to the lack of community support. Left in a state of limbo, both the city and, to a lesser degree, the state seemed resolved to search for a more appropriate local place for the hatchery.

Robinson said he didn’t have any new information on this front.

“Probably in January we’ll know more,” he said. “We plan to at least reach out to DEP and see what can happen.”

Other issues broached during this initial press conference included the city’s human resources manual, or lack thereof (the issue is currently being evaluated); stormwater management (clogged drains are being cleared, with longer term solutions, such as lowering the water table at the site of the former wastewater treatment facility, being explored); the recently completed but not-yet-released study concerning the city’s port (Robinson is keen on research-centric projects); and the Downtown Improvement Board and downtown parking (“I think the DIB will be evolving over the next couple of months”).

The mayor said that one of the biggest initial challenges he faces is hiring a city attorney. Under the previous administration, much legal work was outsourced to outside firms, a practice Robinson would like to curb in an attempt to rein in legal costs.

“Obviously the week is going to be a big week in figuring out where we are on the legal status,” Robinson said. “My preference would have been to have somebody in the position, but at this particular time I don’t have anybody.”

[pullquote]“My expectation is that we would have an in-house team, but I would like to bring in an attorney and allow them to build their own team.”-Robinson on city attorney[/pullquote]

The mayor explained that he ultimately plans to have a fuller legal team, but at first is searching for an attorney to lead that eventual team.

“My expectation is that we would have an in-house team, but I would like to bring in an attorney and allow them to build their own team,” he said.

Though the city does still have an attorney — Lysia Bowling — the mayor said he has contacted the Tallahassee firm Nabors, Giblin and Nickerson about helping out until a new city attorney is found.

“They know municipal law. If we need somebody to help us and be an interim they can help us,” the mayor said, noting that a hiring search will be launched in January.

The mayor also addressed his recent selection of Quint Studer to lead his transition team, which is currently working to assess the city’s needs in a variety of areas. The businessman, developer and philanthropist has made considerable investments in Pensacola and frequently interacts with the city on a range of issues, from matters at Maritime Park, where his minor league baseball team plays, to development projects, such as the Southtowne complex and new YMCA on Tarragona Street.

Robinson said he was not concerned about such issues, and stressed that Studer is a valuable source of knowledge that the city should tap into.

“You know, Quint’s never asked for anything one way or the other,” the mayor said. “In fact, he’s one of the ones that says, ‘hey, everything’s gotta be a fair process and everyone’s gotta participate.’ I think he would expect a fair process in anything that he’s doing. I’ve never known him to do anything other than what’s above board. It’s one of the things that he’s always preached has been ethics. That’s one of the reasons I thought he’d be very good at that position and moving forward.”

Also, he continued, Studer possesses a skillset the city is in need of: his former consulting firm specializes in assessing and improving employee culture at corporations.

“He does this for corporations all over,” Robinson said. “So, if he gets paid money by these people to do it, corporations, to tell’em how to make the transition successful, if I can get that expertise and I can get it for free for Pensacola it would seem like I would at least reach out and do that.”

Also during this initial press conference, the mayor was questioned about how he planned to change the way in which the city dealt with the media. Admiral LeRoy, Jr., publisher of OutFront Magazine, described how the Hayward administration routinely dodged reporters’ calls and withheld or dragged its feet on issuing requested information. By the end of his term, the mayor attempted to circumvent most media outlets and communicated with the public primarily through a city-issued newsletter.

“I certainly apologize for the experience you’ve had in the past,” Robinson said. “We’re working on trying to improve. Obviously, that’s why we started here. We want you to be able to ask real questions and us give you the answers we have.”

Robinson’s next mayoral press conference will be held Dec. 10 at 9:30 a.m. at Pensacola City Hall.