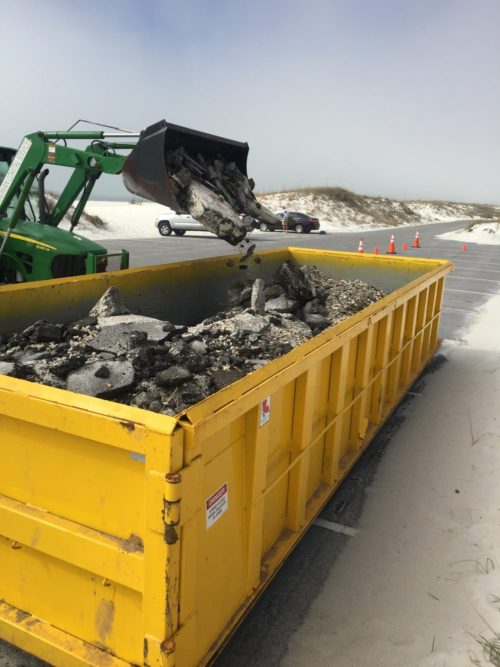 Gulf Islands National Seashore officials announce completion of the asphalt removal project, an effort that began at Fort Pickens in September 2016. Approximately 400 yards of asphalt fragments and road base material were removed from over 150 acres of the Fort Pickens Area. Onsite work wrapped up on February 24 in time for shorebird nesting season.

The Fort Pickens cleanup is part of a much larger five year project, which includes the Fort Pickens, Santa Rosa and Perdido Key Areas of the park. Throughout each area, asphalt pieces ranging from the size of large slabs to as small as a quarter of an inch in diameter, and other road base materials will be removed. The project allows work to be performed only while shorebirds and sea turtles are not nesting, and it also includes replanting vegetation in areas damaged during the asphalt removal process. This will limit the impact of the removal activities on the park’s natural resources.

Roadway debris has accumulated for more than 20 years following hurricanes and storms that destroyed and scattered portions of the park’s asphalt roads. The Beach Enhancement and Asphalt Removal project is funded as a Deepwater Horizon Natural Resource Damage Assessment (NRDA) Early Restoration project to compensate the public for the injuries to recreational use of the national seashore caused during the 2010 Deepwater Horizon oil spill.

More information about other Deepwater Horizon Natural Resource Early Restoration Projects can be found at the Trustees’ web site: www.gulfspillrestoration.noaa.gov.