“All we lack now is sinking it,” said Frank Patti.

With a deck full of stainless steel tributes, the barge will be sunk about three miles out in the Gulf of Mexico. Resting on the bottom, the vessel will become a haven for fish and an aquatic museum for scuba divers.

“The divers are going to love it because of all the photo-ops,” said the Scuba Shack’s Eilene Beard, as she enjoyed the view topside this afternoon.

Patti originally planned to place a few plaques on the barge and sink it as a tribute to his family, a longtime Pensacola seafood institution. As the plan evolved, he partnered with the Emerald Coastkeepers, giving area businesses and individuals the opportunity to commission stainless steel art pieces of their own, with the proceeds going towards environmental education and restoration.

The tributes were made by Kevin Marchetti, of Renaissance Man’s in Pensacola. They include tributes to the Patti family, the Blue Angles and the iconic Pensacola Beach water tower and signage. Colorful fish and sea turtles are mounted along side the tributes. 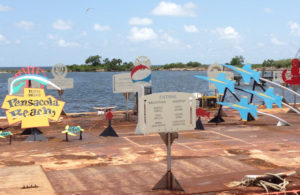 “It really turned out nice,” said Coastkeeper Sava Varazo, adding that additional rounds of memorial pieces may be placed on the barge periodically after it is sunk.

The barge is currently docked at Patti’s Seafood. It will be blessed and begin its voyage out into the gulf at 9 a.m. Friday. Local boaters are encouraged to make the trip out for the barge’s sinking.