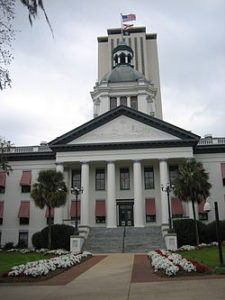 It looks like the official seal of the Florida Senate will soon be losing a few more flags.

Last year, in the wake of racial unrest and a nationwide rejection of the Confederate battle flag, the Senate dropped the banner from a set of flags that served as the background for the chamber’s seal. The move came just a few months after a man with white supremacist views opened fire at an African-American church in Charleston, S.C., killing nine people and sparking a debate about the iconography of the Old South.

A seal that the Senate approved on a kind of provisional basis in October kept the “fan” of flags, but with a different set of banners that included the 1513 Spanish flag, the 1564 French flag, the 1763 flag of Great Britain, the current U.S. flag and the current Florida flag.

That version of the seal now hangs on a wall behind the rostrum used by Senate President Andy Gardiner, who helped push through the change, and pops up in other places where the chamber’s official symbol is needed.

But on Thursday, the Senate Rules Committee voted to recommend that the seal lose all of the foreign flags, instead bearing simply the flag of the United States and the official banner of Florida. The reason, Rules Chairman David Simmons said, is historical accuracy.

There’s no evidence that two of the flags ever flew in Florida. For example, the Spanish in Florida would have flown a national flag used from 1784 to 1821. The Union Jack of Great Britain is legit, but the others appear to not be.

“Only one flag on the fan of foreign flags (on) the seal is historically correct,” said Simmons, R-Altamonte Springs. “And another that should have been included was left out.”

The proposed new seal isn’t exactly a surprise; Gardiner said back in October that it could be changed again to address some members’ concerns. But final approval would mean once again swapping out the symbols, at least where the current seal appears.

The rule change dealing with the seal now goes before the full Senate.

After a recent legal ruling on redistricting and a renumbering of the Senate map, some races for the upper chamber have started to take shape, with Democrats and Republicans figuring out which districts they want to run in now that boundaries are set.

Sen. John Legg, R-Trinity, told the Tampa Bay Times this week that he wouldn’t run against Sen. Wilton Simpson, R-Trilby, averting one incumbent-vs.-incumbent race in Pasco County. That will allow Simpson to remain on track to become Senate president following the 2020 elections, while Legg will likely look for another, perhaps delayed path back to the chamber.

Meanwhile, the seat being vacated by current Senate President Andy Gardiner, R-Orlando, could be getting crowded. Former Democratic House members Mike Clelland and Linda Stewart have jumped into the race, which already featured three candidates. But Gardiner’s district would shed territory in Brevard County and pick up more of Orange County, becoming more Democratic in the process. It’s not clear how that and the presence of two former legislators might change the calculations of other candidates.

And Rep. Daphne Campbell, D-Miami Shores, this week announced that she would run for a reconfigured Senate seat.

“With the new District 38 taking in many of the same communities I currently serve, it makes sense to give them an even louder voice in their Legislature,” Campbell said.

But that will likely bring Campbell into a confrontation with Sen. Gwen Margolis, D-Miami, if the incumbent moves from her current home in a swing seat to run in a district more friendly to Democrats.