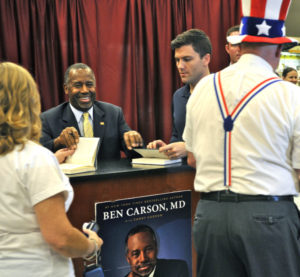 About 2,000 people braved Sunday’s downpour to make it out to Books-a-Million in Pensacola for an opportunity to meet GOP presidential candidate, and newly crowned front runner in the crowded Republican field, Ben Carson as he swung through the Panhandle on a book-signing tour.

“They were already lined up outside at 8 o’clock,” said Donna Raimondi, the store’s co-manager.

The crowd grew to fill the store — forming a line winding through the aisles — until the candidate’s arrival at 3:30 p.m. Carson took a few questions from the media and signed copies of his book, “A More Perfect Union,” for about two hours, before departing for another round in Panama City.

— for the complete account of Carson’s visit, see the next issue of Inweekly